The poker bot perfecting the art of lying 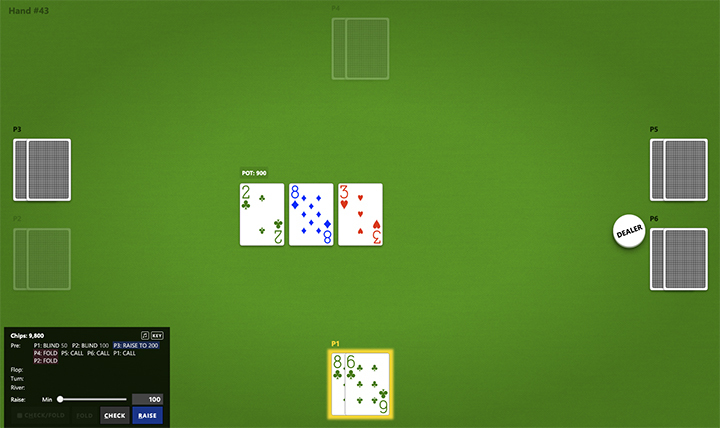 A poker-playing bot, Pluribus, just beat out more than a dozen of the world's best poker players at Texas Hold'em. Pluribus, which was created by an A.I researcher named Noam Brown, who now works at Facebook, and Thomas Sandholm, a computer science professor at Carnegie Mellon University.

What makes the bot interesting is not that it's great at poker, but that it was able to learn how to handle itself when faced with adversaries that are lying to it, hiding information from it, rather than training it. From an interview with Medium's OneZero:

“I think this is really going to be essential for developing A.I.s that are deployed in the real world,” Brown told OneZero, ”because most real-world, strategic interactions involve multiple agents, or involve hidden information.”

If the bot was actually playing for money, it would have been making $1,000 an hour against these professionals, according to Facebook's press release about the experiment. You can watch a video of an A.I. learning from an online poker game right here, by "regretting" a loss and better understanding the consequences of a bad play, if you like.

All of this matters in a deeper way, far beyond poker, because it could be applied to help computers better understand paradoxical situations. People in the real world lie, are unpredictable, and do bizarre things—something computers have long struggled with.

Being able to guess at those myriad of unpredictable behaviors in a self-driving car, for example, would help them better understand how to react to all of the situations that could unfold if a driver suddenly did a U-turn, or slammed on the brakes.

Poker has long been a challenge in the A.I. field because it involves so much of this unpredictable complexity, hidden information, and other strategies that don't apply in the case of other games that have already been defeated, like Go or chess.

The industry is already concerned that the release of such advanced technology will completely end online poker—which is precisely why Facebook appears to have held back the code or specific demonstrations from being made available. When the code is published, and it inevitably will be, it's likely that online poker will die overnight because it would become exceedingly difficult for a human player to win.

As it turns out, computers have the greatest poker face of them all.

Postmates has explored a sale to Uber/Doordash, or a last-grab IPO
It was one of the earliest food delivery hype startups, but it's long struggled to maintain a foothold in the face of larger competition from Uber Eats and GrubHub. It doesn't look like the outcomes for Postmates are great—and given it's only really available in the U.S. versus its competition, which is global, I'd expect it to be gobbled up for scraps once it's burnt through whatever cash it has left.

Microsoft says its Slack competitor, Teams, has more daily active users
This is an interesting development, with Microsoft claiming it has 13 million DAUs, but I take it with a grain of salt because:

1) Microsoft bundles with with an Office365 subscription
2) Slack hasn't updated its daily active users in months, after the IPO, because it's in a 'quiet period'
3) Microsoft doesn't define what a daily active user is—did someone open their Outlook inbox, where the product shows up? The numbers are fishy, because they remind me of the techniques Google used to make Google+ look big: slapping it in Gmail and YouTube to make it unavoidable.

Twitter broke for more than an hour yesterday, during White House social media summit
It was a gloriously relaxed hour; I even read a book.

Donald Trump is 'not a fan of Libra' or any cryptocurrency
This is no surprise, but it is interesting that he went on a rant about it on Twitter—a hearing is scheduled for next week at the Senate Committee on Banking, Housing and Urban Affairs. It's not surprising the president of the US wouldn't like something that could destabilize the US dollar, but it is interesting how much attention this is getting already from politicians, and I expect they'll come down hard compared to the privacy summit held last year.

Apple has begun exporting India-made iPhones to European markets
After a decade of exclusively building in China, Apple has started building older models of the iPhone out of India, and is now shipping them. I would categorize this as "hedging risk."

Must read: The California coast is disappearing under the rising sea. The choices are grim.