Meet the startup beating Microsoft at its own game 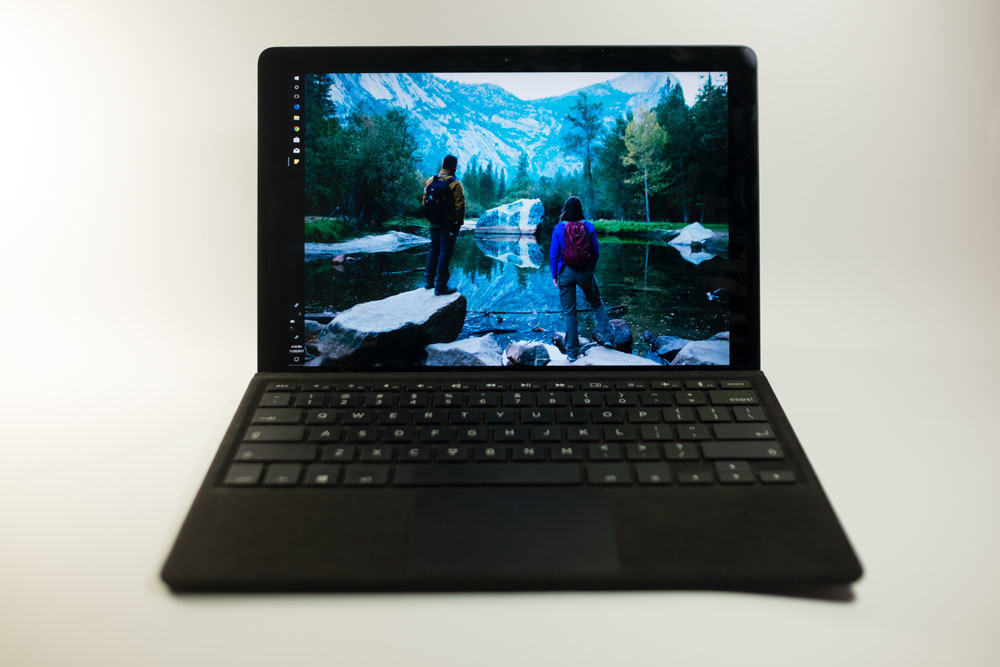 For the last two weeks I've been testing out a laptop from a company nobody has ever heard of and somehow, inexplicably, it's actually good.

The Eve V is an impressive Surface Pro ripoff: it goes all the way up to an i7 processor, 16 GB of RAM, 1 TB of storage and a beautiful IGZO 1440p screen (that's 2560 x 1440, which is a minimum these days in my book). What's different about the V is its build quality: it literally feels nicer, and more well built, than Microsoft's own Surface and looks better too thanks to the lack of any branding on the device.

There's two components that caught my eye, specifically, that I've not seen anywhere else. First, this device has baked in far-field microphones -- the kind you'd find in Google Home or Amazon Echo -- I don't know of any PC/Mac with these and it makes doing video calls or audio calls really good.

I can't exaggerate how much crisper the audio is for the receiving party, and it doesn't echo back the person talking with speakers on. It's a game changer on its own, and has been much help when calling clients this past week without headphones.

The second compelling part is Eve has a high-quality fingerprint sensor built right into the power button. I've tried Touch ID on the MacBook Pro and it was a serious improvement in the barrier to getting into your computer, but this is even better: it's hidden away, integrated well and works fast. I wish every computer had this.

There are a couple of downsides: I'm not a huge 2-in-1 person, so while the construction of the device is lovely and being able to pull apart the keyboard and screen is novel it's just not something I care about that much. Most of all, the weight of the device is in the screen so it props itself up (like Surface Pro as well) using a leg -- that tends to make it unwieldy for use on a plane or train.

All of this said, the V has convinced me on the concept a lot more. Windows 10's touch apps are legitimately good now (their email app is the best I've seen on a tablet) such that I was in a cab last week and found it conducive to whip off the keyboard and just triage my inbox with touch.

The other downside, and perhaps this is niche, is I just don't understand why more laptop makers don't jam in a LTE connection. It's been on my list for a long time and V feels like the perfect fit for this. You can argue your phone does the same all you want, but there's something magical in being able to just be online without messing around in menus trying to get connected.

A longer review of the Eve V is forthcoming, but I'm excited to see the PC industry is awake again. I've been hunting around for a great MacBook replacement for some time, after I made the jump to Windows full-time, but until recently the quality just hasn't been there.

With devices like Eve V, the Dell XPS 15 (my daily driver) and Surface Book 2, it really feels like the industry is innovating again and actually competing with Apple while it's down-and-out on the laptop front. I'll link my review here when it's published but it's safe to say I won't be going back to macOS land anytime soon.

I won't get into a discussion about how ridiculous it is that the Trump administration is attempting to dismantle net neutrality, but this is a harbinger for something that's going to get out of control: the FCC wants to repeal net neutrality in totality.

Politico reports today that the FCC will vote in just a few weeks on this after laws were put in place by the Obama administration forbidding AT&T and Comcast from giving traffic priority and requiring them by law to treat all web traffic equally.

Ajit Pai, the Chairman of the FCC, has said repeatedly he thinks the ISPs are better self-enforcing this, but the notion that they'd not take advantage of a law-free environment is ridiculous, given that just a few years ago Comcast throttled Netflix when it refused to pay for peering.

Tech companies like Netflix, Facebook and others support the rules because it gives them a fair chance at competing. If a startup that directly competed with Netflix came along in the future and used a ton of traffic, they'd somehow need to be able to afford the cash to get priority on an ISP's network, effectively killing competition entirely.

Phew, I hope this doesn't happen, but it's not looking good. The vote takes place on December 14 and is likely to end up in court yet again if it's repealed. Will tech companies black out their websites like they did for SOPA? I sure hope so.

The Norwegian hacker that exposes pedophiles
Incredible long read: a profile on Einar Otto Stangvik, a hacker in Norway that works to expose the people behind online child pornography. This story is intense, but discusses how police ran a pedophile forum for months and he exposed them for it, and how he grapples with that.

Amazon Web Services gets a "Secret" region
Yes, no kidding, there's a new "secret" category in AWS so that CIA, FBI and other agencies can use the cloud for 'top secret' workloads. I'm sure it'll pay well for Amazon, but I just love the irony in announcing your 'secret' private cloud.