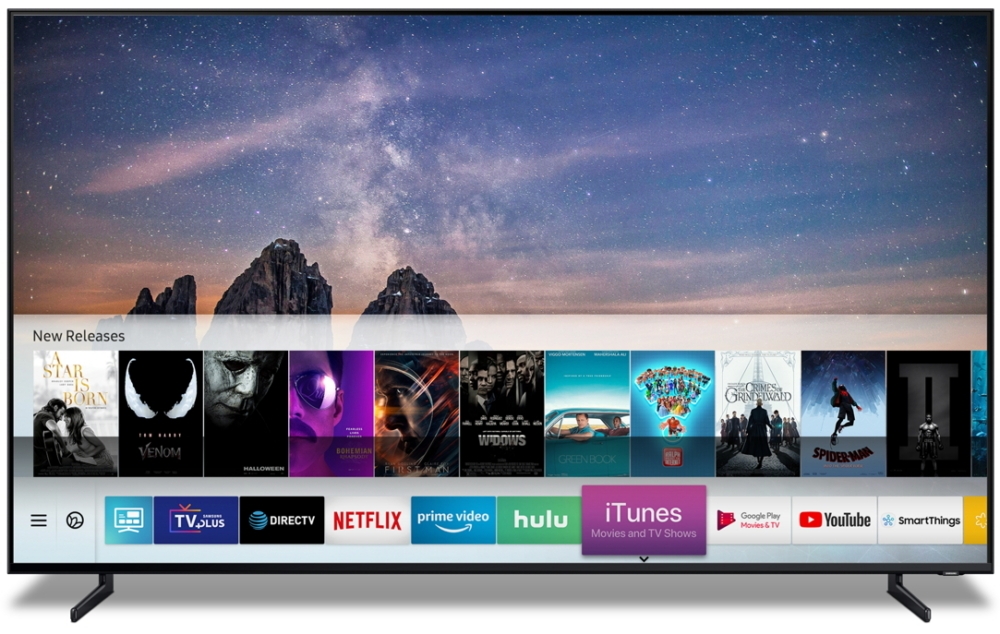 Bringing its services to other platforms is rare for Apple, but there's a quiet sea change occuring at CES this week as the company is quietly allowing TV makers to bake its services into their own software for the first time.

I initially scoffed at this — who actually wants iTunes — but this isn't even really iTunes at all: it's just the brand, applied to the movie and TV streaming product.

With iTunes coming to Samsung TVs, that's a huge move into the streaming market: TV was something Apple messed around with, but it was largely locked up in the Apple TV, a dedicated device that was a hard sell when smart TVs became ubiquitous. As people became more willing to pay for content, everyone else was there: you can pay for movies on Google Play Movies and Roku, as well as many other places, with no hassle, on almost every platform.

Meanwhile, iTunes both has the best collection of high-quality (particularly 4K) movies, the most competitive pricing (no tiers for quality of the content) and the back catalog dwarves that of the others. But, it's relegated to only the Apple TV and iTunes desktop, missing millions of potential customers and largely being ignored by those that are happy to use the software on their TV itself.

This was clearly a problem for Apple, which has repeatedly highlighted the need for the company to pursue alternatives to hardware revenue as it's become harder to sell iPhones. TV and Movies is a clear opportunity, and many rumors suggest that Apple plans to push into a full-on streaming product, with the company buying up the rights to a plethora of upcoming shows and movies without a peep as to what it's working on.

Widening the net by adding iTunes to the home screen of Samsung TVs was a genius move that will place it in front of millions more people every day, but putting Airplay everywhere is a trojan horse; anyone with an iPhone can rent an iTunes movie and beam it to any TV, without iTunes, massively increasing the addressable market.

I suspect we're going to see iTunes and Apple's larger media products evolve in a big way this year to invite more than just iOS users into the market. As someone who formerly found erm, obtaining movies from the internet easier than paying for them, but switched to preferring to pay, I'm excited for more choice.

What I'm waiting for is how this all plays out. Disney plans a streaming service, with all of its own content. Apple is buying the rights to movies and TV shows. Amazon, Netflix and others are too. Either we're about to enter the golden age of streaming, or a fragmented hellscape.

Microsoft woos developers with unlimited, free repositories on GitHub
In a huge change, GitHub is now essentially free by default. It's playing catch up to Gitlab, Bitbucket and other competition, but now anyone on the platform can create private repositories for free. I paid $7 per month for years and immediately downgraded, but this is a clear way to win over developers with some good karma.

A report found that over 61 percent of apps send data to Facebook when openedI've been thinking a lot about the role that Software Development Kits (SDKs) invisibly play in the mobile ecosystem, silently tracking users and sending off their data, and wondering when the Facebook SDK would become an issue.

Facebook's SDK is embedded in essentially all of the top million iOS and Android apps, making the service unavoidable even if you don't use it. This study looked into the extent of the problem, and discovered tracking happened regardless of if you're logged in.

Intel's 10nm chipset (Ice Lake) will ship by the end of 2019
After sharing that the company is rethinking how it builds chips in late 2018, Intel is finally shipping a 10nm product this year. Lots of new things here, and these are a powerful jump up that should allow thinner, lower-powered laptops and tablets that last longer.

Toyota's self-driving cars are focused on helping drivers, not replacing them
This is how you gradually convince the world that self-driving is here to stay: win them over through useful features that don't try to outright replace drivers, but help them stay safe.