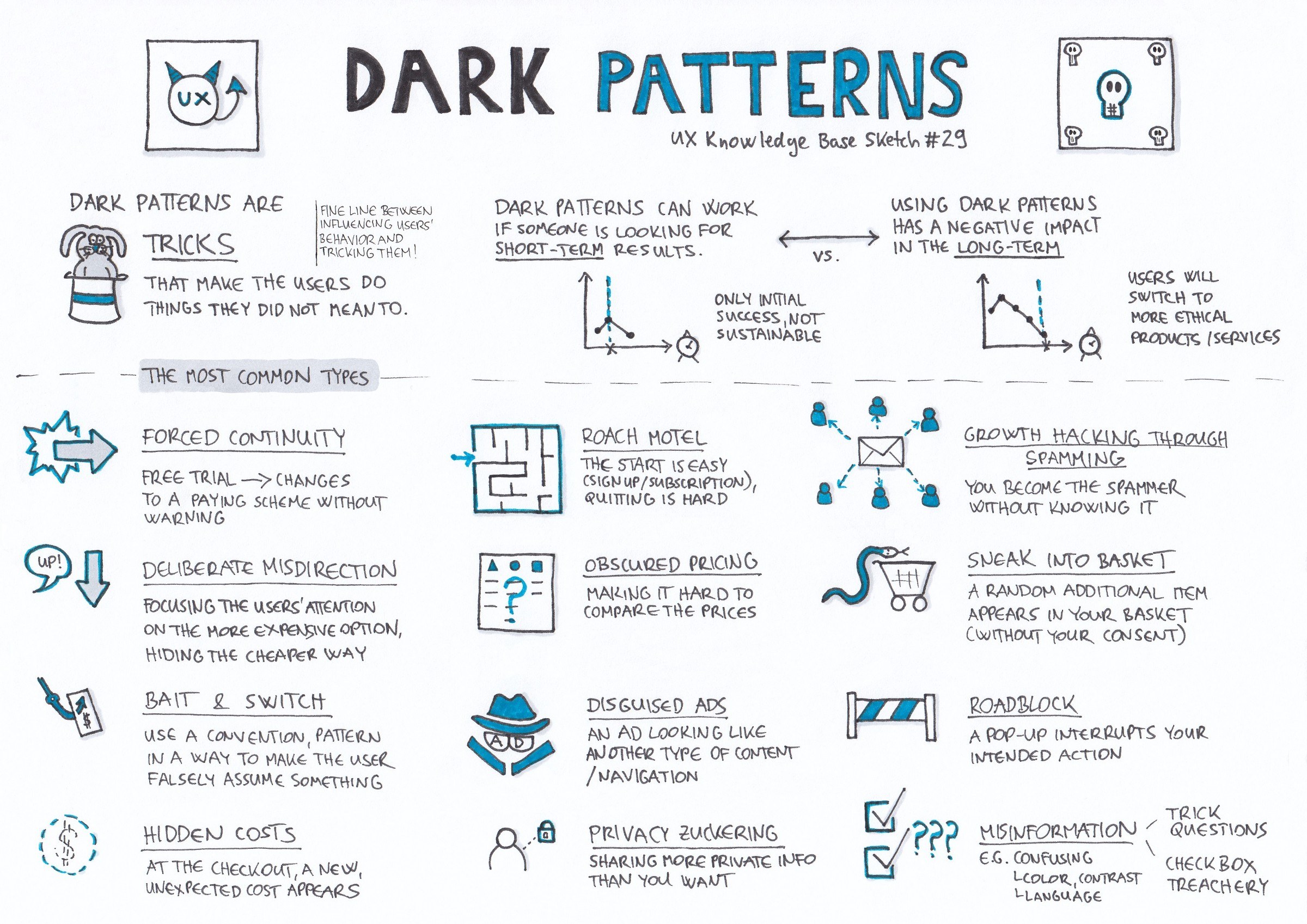 If 2019 will be remembered for anything, it might be the year that technology gets regulated. US senators are moving to ban online platforms from dark patterns—and from making their services addictive for under 13 year olds.

What that means: the bill goes after bad interaction design that's engineered to trick users into the wrong decision—things like accidentally upgrading their plan to a more expensive one or handing over private information without realizing it.

Who's involved: Google , Mozilla, and Microsoft backed the project but even weirder, Mark Zuckerberg specifically, which is a red flag that the legislation might actually benefit them by making it difficult for others to compete. That said, it would only target platforms with 100 million monthly active users or more.

The problems: what is a dark pattern and what isn't remains vague. Are UX flows such as Amazon's, which is designed to block users from leaving poor reviews, included in this plan? Will A/B testing different designs be considered a dark pattern? The bill currently defines a few examples:

Some examples of such actions include: a sudden interruption during the middle of a task repeating until the user agrees to consent; a deliberate obscuring of alternative choices or settings through design or other means; or the use of privacy settings that push users to ‘agree’ as the default option, while users looking for more privacy-friendly options often must click through a much longer process, detouring through multiple screens. Other times, users cannot find the alternative option, if it exists at all, and simply give up looking.

Now what? The bill faces a bunch of hurdles, including a House debate, and won't become law for a long time yet—but expect more like this in the coming months as senators in the US hone in on technology companies.

The lovely sketch of dark UX patterns above comes from this great article by Krisztina Szerovay that looks at all of the curious different kinds—I hadn't realized there were so many!

Stack Overflow publishes an in-depth look at the technology industry every year based on answers from more than 90,000 developers—and this year's results are in.

The highlights are always fascinating: Python is the fastest growing programming language again, more than 66 percent of developers said they don't have any dependents and React is the most loved web framework of 2019, closely followed by Vue.

Another fascinating shift? Microsoft has won over the developer world with Visual Studio Code, its open-source coding tool. More than half of web developers now use the tool, outstripping even the most resilient editors like Notepad++.

OK, but what's the highest paying job? The average global salary for Clojure developers worldwide won out at $90K per year, but in the US specifically it's Scala that wins at an average of $143K a year. The highest paying job title, however, is engineering manager, at $95K a year globally and $152K in the US.

What about the bad bits? Developers dread Drupal more than any other web technology, at almost 70 percent of respondents, followed by jQuery on 54 percent.

A new question asking developer perspectives about the site—which is often criticized for being heavily male—found that female developers used words like "condescending" or "rude" to describe answers, while men were more likely to use the words "expert" or "algorithm."

We're expecting Uber to file documents for going public this Thursday providing our first real insights into what makes the company tick. Stay tuned for that, and analysis here, when that lands.

Another tech company called PagerDuty—which helps on-call personnel get notifications about critical problems—plans to IPO for $1.69B in the next few weeks, too.

Google is all-in on hybrid cloud with Anthos
Interesting play from Google here: a managed service on top of Amazon AWS, Google Cloud (GCP) and Microsoft Azure that allows companies to span their workloads across multiple clouds—lowering costs and their dependency on a single provider.

Pixar's former president—and lots of animators—say they have aphantasia
A wild, mildly related read about the creative, successful people who can't conjure images in their mind, but succeed regardless in spaces where you'd assume it would be a challenge.

There's (another) new Helvetica in town, 35 years on