Yesterday was a big day for Amazon, Apple, Facebook and Google, the largest tech companies in the U.S., as they faced a hearing over the question of whether or not 'big tech' is bad for competition. It was held on the same day Facebook found itself facing questioning over its cryptocurrency, Libra, as well.

The hearing was a way to put a face to concerns that Silicon Valley isn't being managed by lawmakers, publicly questioning them on a range of concerns. David Cicilline, chairman of the antitrust committee, said that thanks to these companies' scale, the internet had become "increasingly concentrated, less open, and growingly hostile to innovation and entrepreneurship."

It's fascinating how different the tone was from the Facebook privacy hearing last year—where lawmakers struggled to understand what they were up against, and bumbled through complicated topics. They get antitrust, and seemed largely pissed off by how flippant the largest tech companies have been historically:

Setting the tone for the hearing, Cicilline also read aloud from testimony submitted by one of the tech giants’ top critics, Tim Wu, a Columbia University law professor who has said Facebook should be broken up. Wu warned lawmakers that the current concentration of power in the tech industry poses a risk to U.S. innovation.

At one point, Facebook's representative was directly asked: "Is Facebook, in your view, a monopoly?" Which, of course, was met with a no, and similar questions were asked of each company as well—all of whom deflected by pointing to numbers like how Amazon is "just 4% of the total market."

The hearing was more of a public display of the sentiment in Washington—that these companies aren't listening, and that perhaps it's time to step in. But, so far we've seen a lot of talk, and very little actual holding accountable, and from here it's hard to say whether anything will happen, even if it's clear that the sentiment in government is falling out of love with tech. 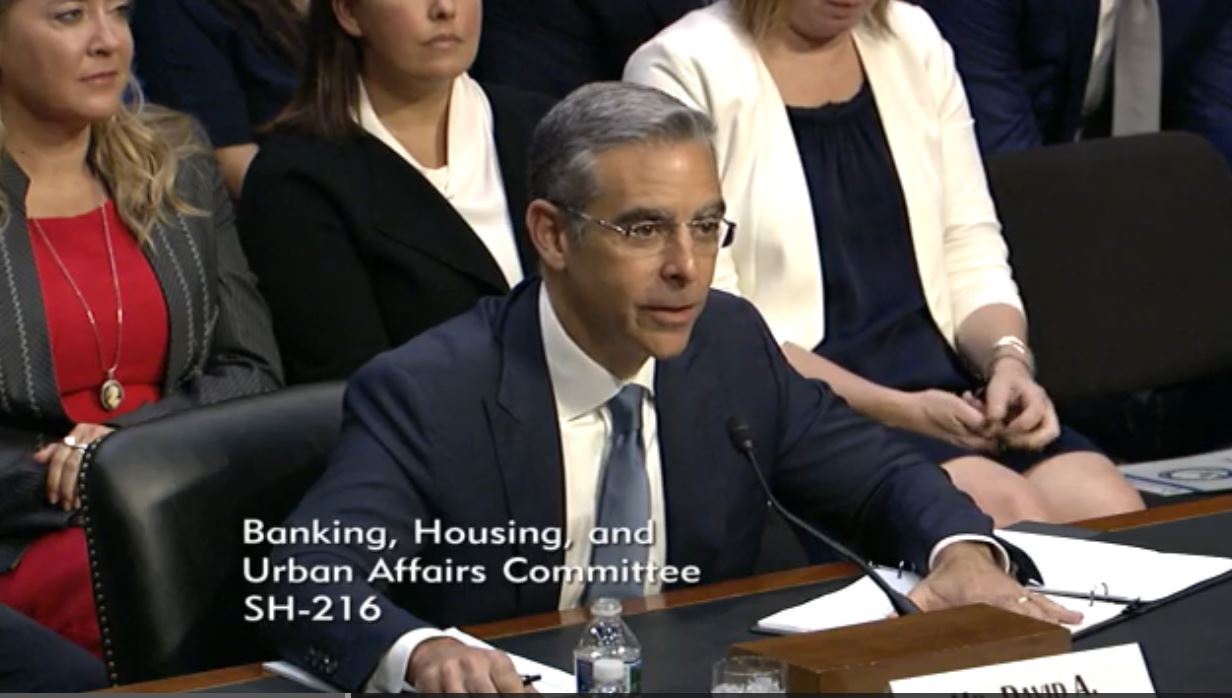 While Marcus was grilled about the currency, lawmakers went relatively easy on him. They asked pointed questions about why it was founded in Switzerland if it wasn't trying to evade legislation (because it's where the financial groups are), and whether or not they'll actually comply with regulations in the U.S. (yes, apparently).

But, what was missing was real understanding of what Facebook is trying to do here: make an end-run around the system by recusing itself from revealing how involved it truly is. Marcus was repeatedly asked why Facebook wants Libra to happen, which he dodged repeatedly by deflecting with the 'it's owned by a consortium' argument, but eventually answered with this:

Marcus noted that blockchain technology is inevitable and if the U.S. doesn’t lead in building and regulating it, the tech will come from places “out of reach of our national security apparatus,” raising the spectre of China

It reminds me of the peer-to-peer days, when Napster argued that it was simply a conduit to the things on the network, and couldn't be held responsible for the content that users shared there—because it was peer-to-peer. Lawmakers struggled with the legality of that for over a decade, because it was hard to direct blame to a single company.

Facebook is doing the same with Libra; it's the one true architect of the currency and platform, but by "decentralizing" it, and involving all of the other companies, it looks less involved. Marcus was quick to name-drop Visa, MasterCard, PayPal and Coinbase as partners almost every time he was asked about whether it was circumventing the financial system, but in my mind those arguments come back to the other hearing that day: Facebook is so big that all of those companies can't not pay attention to the coin.

Marcus' biggest slip-up of the day was telling Congress that Libra will be regulated by a Swiss authority, a statement which was revealed to be false just a few hours, as the authorities in Switzerland hadn't even heard from the company at all. Lying about the current state of affairs, under oath, is not a great way to build trust.

Other than that, Marcus dodged answering questions about user data being tracked by the network, only saying that they would be able to consent to it (which sounds like a nice way to say that there will be a 12-page terms-and-conditions popup that most people will click through.

The hearing showed that lawmakers understood how problematic the currency was, but I was surprised that the tone was... largely positive? One senator did call the company "delusional," and most of them were deeply suspicious of Facebook's ability to secure and develop its own platforms, but it didn't appear to be enough of a concern to truly stop the company from moving forward—despite making loud noise about doing so initially.

What happens from here? Like with the antitrust hearing, it's hard to say—it's possible regulators will try and keep a close eye on the company, but it appears they're largely satisfied for now. Looking forward to receiving my salary in Zuckbucks, soon, I guess.

Apple will fund original, exclusive podcasts to fend off rivals
Despite literally inventing the format, Apple largely left podcasts to die for over a decade. It didn't improve tooling, the podcast listening experience sucked, and it didn't help creators in any way—but the industry grew despite Apple's ambivalence. Now that competitors are seriously in the game, it appears to be afraid of losing its monopoly on the format.

Pearson, the largest education publisher, will go "digital first" with its future textbook releases
Will this be the death of lugging around books in backpacks? Has Gen Z killed textbooks now too?