With the splashy $230 million acquisition of Gimlet Media and Anchor, Spotify made a statement: we're here to play in podcasts, and perhaps even make a move for ownership of the format.

A piece by The Verge yesterday investigates Spotify's plans: it's building original content arsenals just like Netflix, and is executing a playbook just like we've seen from the music industry in the past to get there. One of the first moves: exclusivity for some Spotify-created shows.

The sell to creators is alluring: we'll help you build a show, and provide some tools to monetize it long-term. In return, it'll push for exclusivity to the company's platform, or at least 'time windows' in which it isn't available anywhere else.

It flies in the face of what podcasting is today—a format nobody really controls, and allows listeners to jump in where they choose to—and tries to take control of the fact that nobody else is driving the format forward proactively.

Exclusivity in podcasts is bad for listeners, but good for Spotify's pockets. It forces fans of shows like Reply All to potentially switch app to listen to a single show, the idea being they might stick around. Most of the time users will just give up, but it's a strategy that worked to some extent for Apple and Tidal when they were fighting for a stake in the streaming music business.

But, to understand why this is even happening, we need to look at the state of podcasting infrastructure today.

Podcasting is built on RSS, the format that slowly disappeared out of the modern internet's mind when Google Reader died, but it's thrived as the open mechanism for distribution of audio (albeit invisibly).

Right now if you want to make a podcast you record a show, edit it in some piece of software like Adobe Audition or Garageband, then upload it to some sort of podcast distribution service like Simplecast or LibSyn. That service provides you with hosting, a global CDN and that magic podcast RSS feed that apps understand.

With that RSS feed in hand, the podcast creator then needs to submit it to Apple's podcast tools for approval and list the feed on their website for other engines to discover, along with whatever other podcast networks exist like Stitcher.

When approved, that gets you access to the iTunes network (AKA it shows up in the 'Podcasts' app on the iPhone) but doesn't restrict it from being published elsewhere. The Apple network downloads your files from wherever they're published directly when your subscribers hit play, so you can get incredibly limited statistics on how many people actually tuned in.

Spotify is building a similar network—albeit a closed one—with a vast, already-engaged audience right in its existing apps. When you create a new show using the traditional process, Spotify won't even acknowledge its existence until it's submitted on its own platform. When it's submitted, it actually re-hosts your audio files on its own service (presumably for distribution reasons). 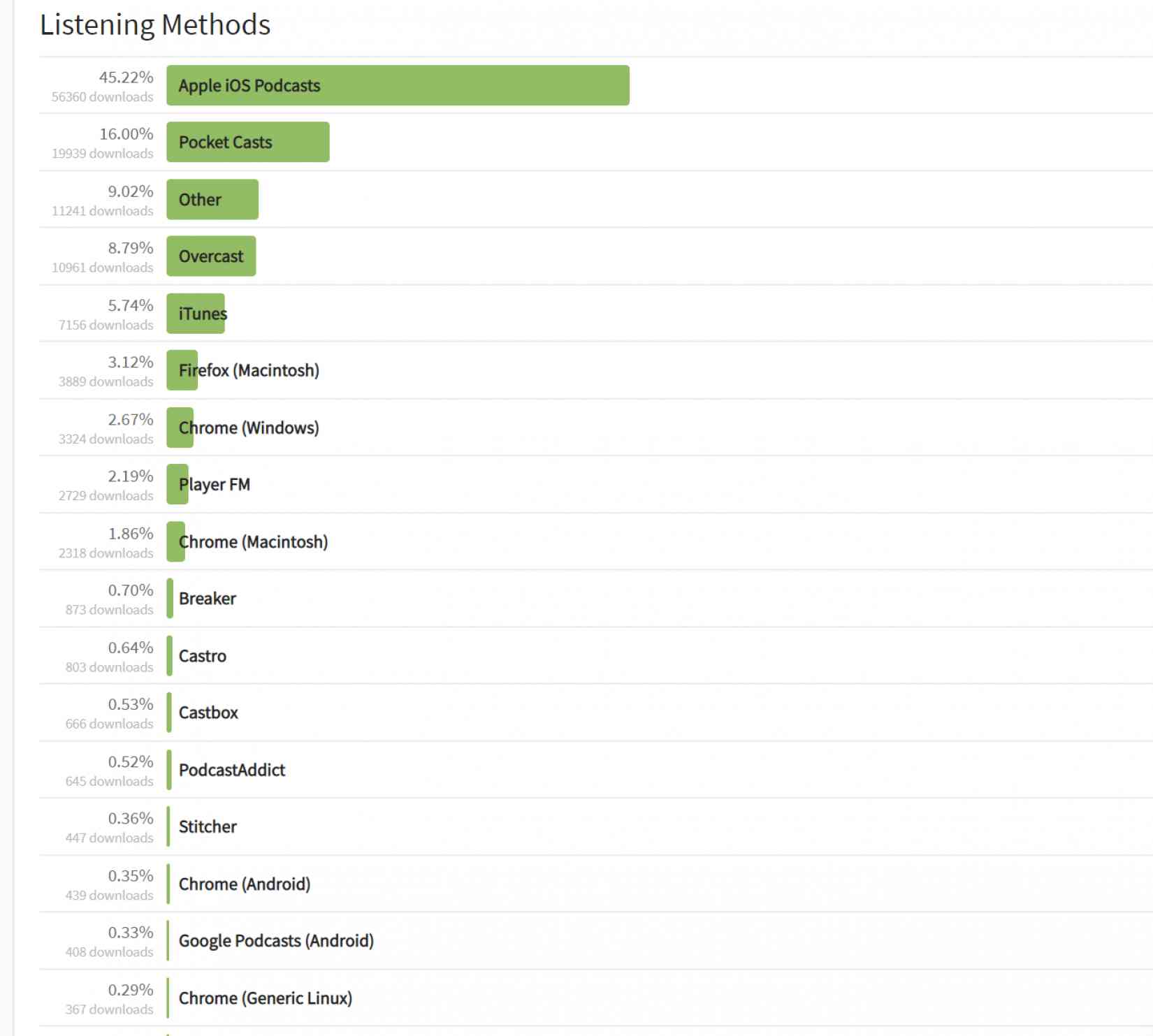 That means you get the distribution from their network, but Spotify listeners are curiously missing from your overall statistics—the company never hits your servers, so you don't get any insight about that data except from the company's own exclusive dashboard. The screenshot above is from the Charged Tech podcast, which has about 200 listeners on Spotify each week, but doesn't show up.

Anchor, the company it acquired alongside Gimlet Media, is a key missing piece in this puzzle. It is the only service that helps creators with the entire process of recording, mastering, distributing and hosting of a show. It is to podcasting what Garageband was to music a decade ago, and it's in the hands of a company trying to build its own network as fast as it can.

If you ask me, that acquisition was a master stroke, and has sealed the deal for Spotify's success: it's now a one stop creation and distribution shop. You will soon be able to go to Spotify as a podcast creator and get a show out into the world in one place, without ever thinking about a server or RSS.

All of this is to say: Spotify sees the opportunity in owning the distribution of a show entirely, so it's making a broad play to be the first place you go to list your show over iTunes. It's basking in Apple's lack of investment into the format, and might just work: creators have been begging for better podcasting tools for years, but those requests have fallen of deaf ears at iTunes.

In that context, Spotify seems like salvation! As a creator, you're accustomed to hacking around the format because the tools aren't there, but Spotify is marching in and making it so simple it makes sense to use its platform and tools.

Frankly, it's fair enough, and Spotify's investment comes with other bonuses too: it has a vast user base that may not have encountered podcasts yet, it removes the need to open a different app for listening to podcasts, and ultimately removes friction from the listening process.

I'm not sure podcasting falling into control of a company like Spotify is a good thing for the format, however. Podcasting has survived to be resilient in spite of Apple's ignorance, and those limitations made the platform thrive. What happens when it's well and truly owned by an entity? More ads? Forcibly paid shows? One place to listen, and that's it?

Podcasting will certainly come of age as a result of this, and other developments in the industry. The question in my mind is whether it can survive the land grab that's to come, given that Spotify is no longer the only big player vying to take a chunk.

Corning is working on bendable glass for foldable phones, but it's not ready yet
Here's an interesting tidbit about foldable phones we're seeing out there today: they're all relying on plastic composite screens, because the industry standard 'gorilla glass' is not ready (or near ready) yet. Another reason to wait out this generation!

Samsung is working on a bunch more foldable phones
See above.

Alphabet's "Chronicle" unveils tool that's like "Google Photos for network security"
It's an AI-powered search for your logs and other metadata that helps detect breaches, and other unwanted activity, historically. As someone who's had to hunt through thousands of logs to track this kind of stuff in the past, this sounds like magic.

The details of what Amazon has to do to get free money from Virginia
Honestly, it's so little that it appears Virginia is just scared of Amazon pulling out, like it did in New York.