Voice assistants are everywhere, but do they matter? 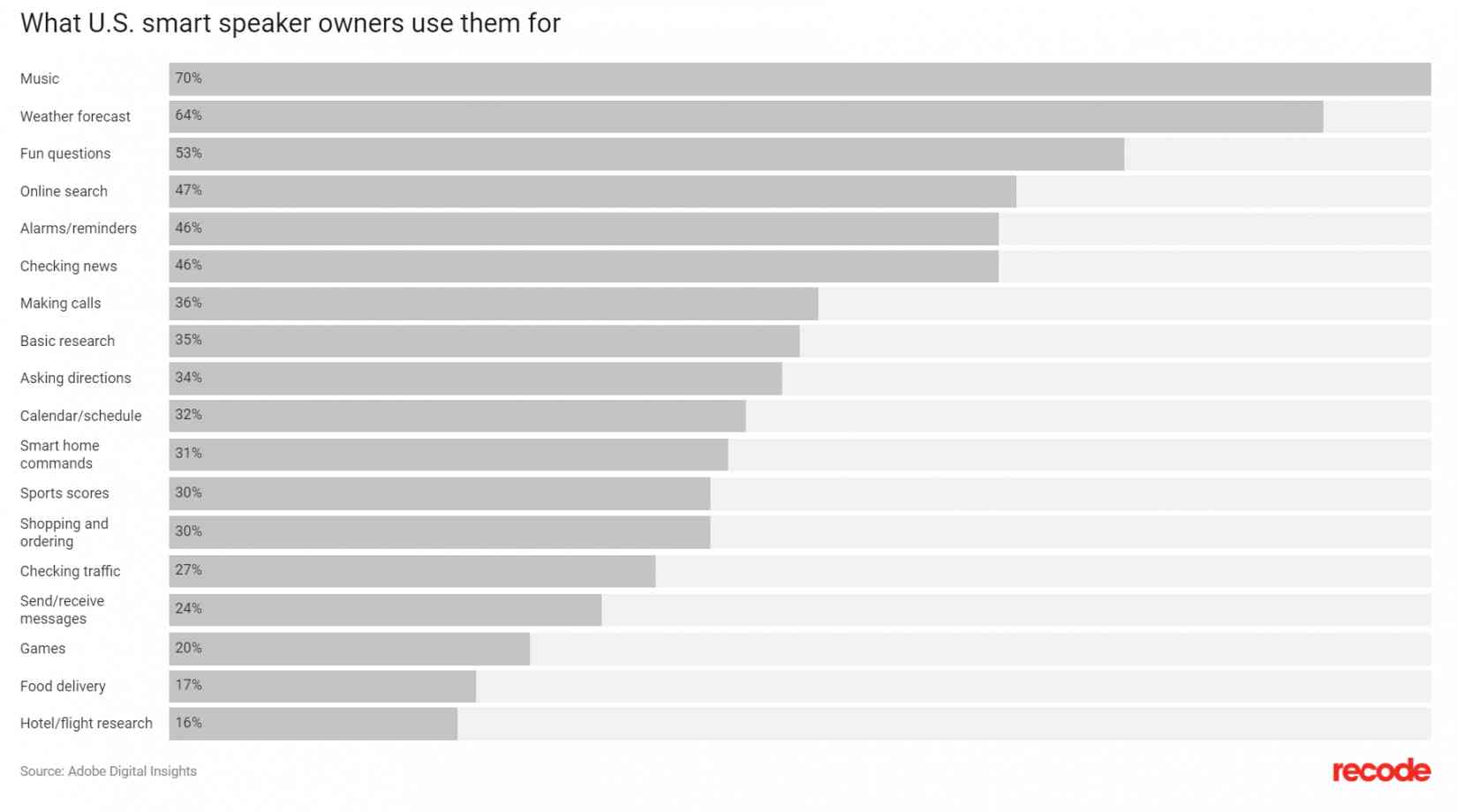 A fascinating report out of Recode today paints a picture of the state of the voice assistant craze, and just how the land-grab for your kitchen bench is playing out so far.

I was surprised to learn that voice interfaces, like Echo, Google Home, Portal and others, are now amongst the fastest-adopted technologies in history, largely driven by their price point of under $200 per unit.

Some predictions say that 225 million voice assistants will already be installed in homes globally within two years, which is far more than anyone expected for a technology that's only a few years old.

What people are really wondering, however, is how consumers will actually use them: a survey of how users interact with their speakers found that the highest use case is music at 70% of respondents, followed by weather forecast at 64% and 'fun questions' at 53%.

When people do use them, however, it makes a meaningful change to how they use services:

What's not working at all, however, is shopping on voice assistants. Less than one percent of Americans said they would prefer to shop on a voice-enabled device over a smartphone, tablet or even a visit to a store and The Information previously reported less than two percent of users had made a purchase with the device this year.

I'm not convinced that purchasing is a clear use case for smart home devices, as it feels like a shoehorned experience when you've already got a phone in your pocket. Searching for something, then flinging it to your phone to actually browse further would be more useful.

It's clear that the missing link for voice assistants is a 'killer app' like with other technologies in the past. It's fun to use a voice assistant, and it may become a part of your lifestyle, but from the top uses of these devices there is nothing but the banal everyday, nothing unique.

We're still really early on these things. I'm bullish on them, and have installed way too many in my house as you likely already know, however I believe the devices themselves need more time to mature.

The addition of a display to Home Hub, for example, is a boon to discoverability and I believe will help drive some of these other use cases after the holiday season.

Before this device came into our home, it was hard to know what you could actually do with the Assistant, but the addition of a screen has been a surprisingly valuable mechanism for trying new things.

Regardless of all of this, the race is clearly underway. Amazon claimed 41% of smart speaker sales in Q2, with Google in second place at 28% and Apple at 6%. Given how early it is, this could change dramatically, but many predictions suggest that long-term you might interact with multiple assistants to get things done, which sounds exhausting to me.

The report is a fantastic look at a platform desperately searching for a use case, with a surprising amount of success despite the lack of a real selling point.

Do you use a voice assistant? Jump into the community and let us know which one!

Google's services suffer mysterious DNS attack
A rogue configuration mistake caused Google's traffic to be redirected across the U.S. yesterday for about 30 minutes via Russia and China, but nobody's sure if it was intentional.

It happened because a tiny Nigerian internet carrier suddenly updated their routing table to the wrong addresses, and the rest of global services quickly took the update as correct, broadcasting it wider as well. That meant lots of Google Cloud went down, but the company says there was no security issue given it encrypts all traffic, and they believe this was accidental, not malicious.

Amazon is expected to pick Long Island and Northern Virginia for its new offices
I refuse to say that this is "HQ2" any longer, given this has become a story about Amazon pushing cities into accepting office buildings in return for concessions.

The inside story of why Palmer Luckey was fired from Facebook
The inner workings of this are no surprise, but the way this story is painted make it seem like he wasn't funding an organization trying to slather derogatory memes across the internet.