Just minutes after I sent out yesterday's newsletter, Spotify published a big marketing push declaring that Apple's App Store practices are unfair, and announcing that it had filed with European Authorities asking them to examine the company.

The campaign, adorably dubbed 'It's Time to Play Fair,' lays out a fairly compelling case for how Apple practices unfair tactics to give itself an advantage in the markets it's playing in. It largely centers on Apple's 30% cut of subscription revenue on the platform, which makes it difficult to compete with the likes of Apple Music, but argues that the entire platform is rife with discriminatory practices.

Spotify has a big problem in Apple Music, because the company can undercut it on both pricing and the revenue it takes home. If Spotify were to use Apple's payments system—it no longer does—it would need to pay 30% of each user's monthly fees to the company leaving it with $7 for every $10. 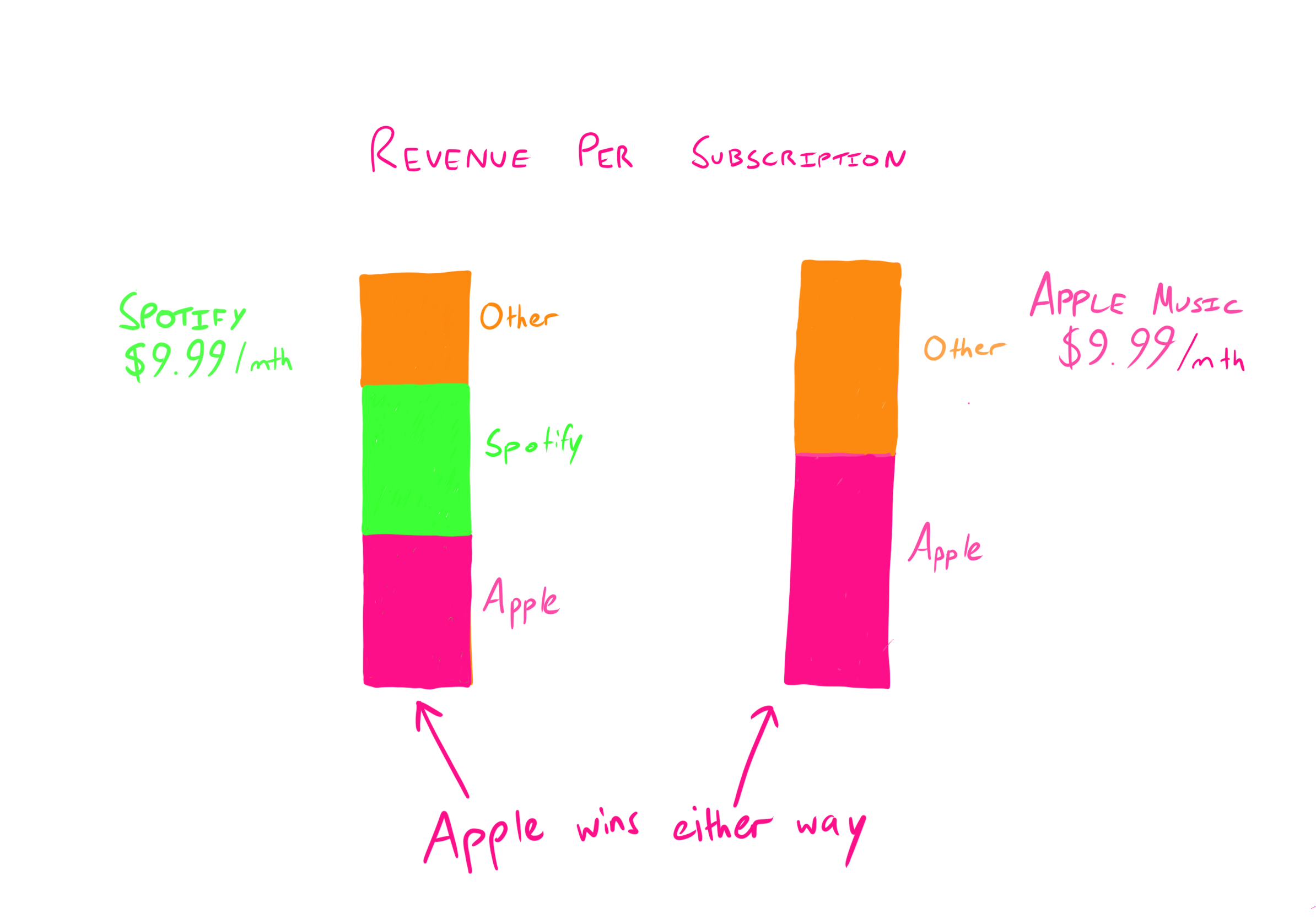 That means Apple's subscription, which is also priced at $10, sees the whole $10 but also benefits from every Spotify subscription. But, the company's biggest fear internally is if Apple should ever undercut it: the company could easily start a price war, dropping the cost down to $7 or less, which Spotify simply couldn't compete with.

So, Spotify doesn't even play the game: it doesn't offer a way to buy a subscription in its mobile app, leaving users to their own devices to figure out how to get a subscription—Apple bans telling users that they can sign up on the web as well.

The argument Spotify is attempting to make goes beyond this, however, to other abuses of platform power to lock it out. It gives a range of examples on the site from Apple refusing to allow it to build a Watch app to the exclusion of all music services outside of Apple Music on HomePod.

It's difficult to fault Spotify's arguments in my mind, because it's fairly clear that Apple is abusing a dominant position in a similar way to Amazon, when it sees popular items and makes its own clone, for cheaper, available. The Apple-focused media has been quick to jump to its defense with an argument that its simply the price of playing on a platform, but I disagree wholeheartedly: the current state of mobile platforms is unfair on those creating apps and services for them, and something has to change.

A dominant argument against Spotify's case is that the fees are fair in exchange for content delivery services, running a payment gateway and so on, but it's not really grounded in reality. Payment gateways, like Stripe, charge 2.9% or less, and bandwidth is cents on a dime. Apple is only charging what it does because it can get away with it, and because Google does the same.

One could argue that Spotify should pay artists more—and it probably should—but losing 30% of every subscription doesn't help much with that. But even then, it's difficult to defend practices like banning developers from asking for payment on other platforms, or even mentioning that alternatives and discounts are available.

The tide has been turning for Apple in this regard lately: Netflix, one of the biggest subscription services on the platform, recently removed the ability to pay for its service on iOS, instead just offering a login screen and no allusion to the fact that you must first pay on the web...somehow. Epic Games, the creator of Fortnite, also went to great lengths to avoid paying Google's marketplace cut by forcing users to sideload its app instead, bypassing the Play Store entirely.

The big question in my mind is whether or not the European Commission will pay attention to the case. It must decide whether or not to take the case, but it is currently tied up in an antitrust suit with Google over Android and other practices. Given the aggressive push to force Google to change those habits, I can imagine it might be eager to pursue an investigation of marketplaces as well.

There's many parallels to other platform debates unfolding in technology right now, so it's important to define where these boundaries really are. Amazon, for example, faced scrutiny in India for using its platform for preferential treatment of its own products (it lost there), along with renewed attention for similar reasons in the United States.

Will Apple back down? It depends. It faces stiff opposition from others irked by the policies, including Netflix, which has reasons to be even more aggravated when Apple finally launches its own streaming service. Taylor Swift managed to push Apple into changing policies for its music trial, can the music industry's woes somehow do it again?

If Spotify were able to push the issue into the limelight, I believe it would win: Apple's 30% cut alone might have a leg to stand on, but with the ban on advertising alternate payment methods and inconsistent rules applied to its own products, it's a pretty uncompelling argument to make.

Facebook's data-sharing deals under criminal investigation
The company formerly did system-level deals with phone makers to gain access to special hooks not available any other way, and now it's under investigation for the circumstances in which those deals were made.

Google's next version of Android (Q) focuses on privacy
Also, for the first time ever, the beta is available already in its unfinished state for Pixel users.

The game streaming wars are going to heat up next week with Google's unveil at GDC, but Microsoft doesn't want to be left out