Not dead, but not alive either 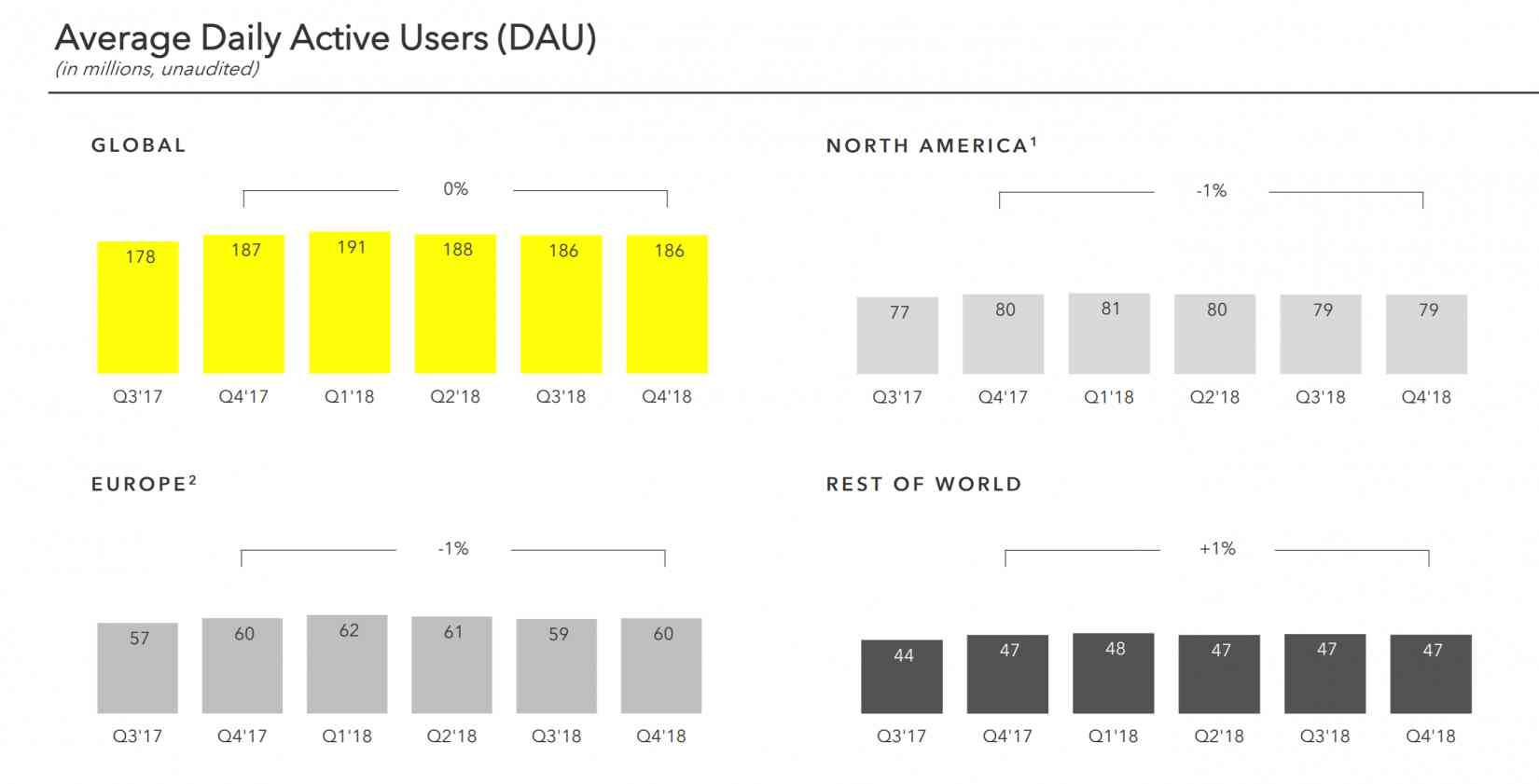 Snap reported earnings today — which reminded me that it both went public and that I was dumb enough to buy opening day shares — and it's not great news: the company continues to burn so much cash that it's now possible to see the company needing a leg up in the future.

The company managed to burn through $166 million in Q4, but that was a huge jump down from the $348 million it lost the previous year. Still, this is a stupid amount of money to be burning, particularly when the company is clearly not growing any more:

Long story short, users aren't growing but revenue is, however that rock bottom moment is on the horizon if it can't speed things up. As Alex at Crunchbase wisely pointed out, the company burnt more than $764 million in cash (and equivalents) last year, leaving it with perhaps 18 months before it needs to make drastic moves to correct its course.

If Snap isn't able to turn things around in that time (and it's hard to imagine how it will so dramatically) it would either need to be acquired or issue more shares to keep moving. Outside of a miracle, it's difficult to imagine what would do this, but it's not going to be another redesign, and Instagram doesn't seem to be slowing down either.

It isn't that Snap is a product nobody wants, because it clearly is: millions of people are choosing to use it daily. The issue it has is a hyper-inflated valuation based on investor expectations... that it focused on that daily active user number and hasn't been able to divert away. That's the same fate Twitter had for years, as it found itself endlessly compared to Facebook, despite moderate success. Can Snap escape the same trap?

Yet another Apple shuffle

I'm not convinced these Apple shuffles are all that interesting to people, but this one is worth mentioning: the company just lost Angela Ahrendts, the executive responsible for reimagining the company's physical stores.

Not only is it odd because the store changes are really reaching fruition only now, but also because her replacement is someone inside the company who has another job. Her successor, Deirdre O’Brien, is the Senior VP of People already, and she'll be doing both jobs going forward.

It's interesting logic given how important the stores are, and that they required a dedicated role in the past, but it's possibly because Apple employs the majority of its global staff in its own stores. Its people lead might be a good fit because of that but it's a difficult stretch for me to understand.

What's also notable is that this departure arrives after such a tumultuous quarter, which also notably saw Apple begin making rare moves like discounting phones and advertising discounts in store windows. It's difficult to draw a line between the two right now, but it's a hard coincidence to ignore when the company finds itself wondering what went wrong.

To be honest, it's just difficult to speculate at all. We'll read lots of headlines saying that perhaps it's for one reason, or perhaps it's for another, just like Quartz does as it tries to unwind all of this. But, HR is a weird world, and perhaps Ahrendts just wanted to stop the job instead.

Reddit raises even more cash.... at a $3 billion valuation
It calls itself the front page of the internet, and I can't believe how it continues to grow. At 330 million monthly active users, it's pretty impressive that Reddit continues onward, and now it's raising serious money to try and keep growing that. Where to from here, however? More ads? Paid products? Reddit has struggled to do much with that traffic, even if it has kept growing.

Europe's Article 13 is back, and it's worse
It looked like the terrible 'link tax' law had died, but it's back from the dead, and hurtling along toward a new horror: let's impose this on everyone, regardless of what they want.

Google released a password checking tool for your browser

Do these tweets bring you joy? If not, clean them up with my friend's Marie Kondo inspired tool.

The React framework just shipped a huge update, with its new 'Hooks' tech for the first time.

Amazon quietly admits it has a counterfeit problem