If you would like to see an interesting experiment in what happens to an industry when you rip out its monetization and reach strategies one by one, the news media is a fascinating case study.

On the heels of Facebook's announcement that the News Feed will remove most brands, another blow arrived for the media on Friday: Facebook will also use the community to rank the legitimacy of news sources.

As part of our ongoing quality surveys, we will now ask people whether they're familiar with a news source and, if so, whether they trust that source. The idea is that some news organizations are only trusted by their readers or watchers, and others are broadly trusted across society even by those who don't follow them directly.

On the surface, this seems laughable at best. My immediate jerk reaction this is was something along the lines of 'but aren't those the same people who believe fake news.'

It is, however, an interesting way to address the problem. Facebook itself has said that this will only be a signal as a part of the 'trust' ranking, but what I'm left wondering is how these surveys account for people who tend to say a source is untrustworthy because they don't like a particular story, or it doesn't align with their views.

I believe the company's intent is noble, and this could work in an ideal world, but I also think that Facebook puts far too much stock in the masses. In an ideal world, people would happily say a news source is reliable with no bias, but when it comes down to it, that's not how people think.

There's a great reason for all of this: Facebook does not want to be the arbitrator of the news industry, and prefers to keep it at arms length. The news industry brings eyeballs (which Facebook now owns) but it also brings problems to your platform (how to make money) and a moderation challenge (how to deal with comments).

The actual problem here isn't that the mechanism is a bad idea, it's that people are not able to use such tools in a trustworthy way. Facebook has been unable to stop people abusing its other tools for deception, what makes it so sure this one won't be used as a way to de-rank and kill legitimate publications?

Netflix is a media giant

Yesterday Netflix reported earnings for the quarter and it's official: this company is a media giant. As of yesterday, Netflix is worth $100 billion, making it worth more on paper than all media companies out there, bar Disney.

Out of its earnings came two very interesting data points: first, Netflix is growing faster globally than it is back home in the US, and expects to make more outside of the US in the near future

Second, Netflix appears to be willing to burn money instead of releasing bad content, taking a $39 million write off for killing House of Cards and the movie Gore after it severed its relationships with Kevin Spacey following accusations of sexual misconduct.

With all this in mind, I'm perpetually surprised by Netflix's ability to perform. Not only did it raise prices in October, subscribers did not care, and it now has 117 million streaming subscribers.

It's also proving that big bets on original content are paying off. Stranger Things, 13 Reasons Why and Bright (now the most watched movie on Netflix of all time) have proven this, so Netflix plans to invest double the marketing budget in 2018, $2 billion, to bring that content to a wider audience.

This graph by Tefficient speaks volumes about how well Netflix is pushing forward with new audiences: 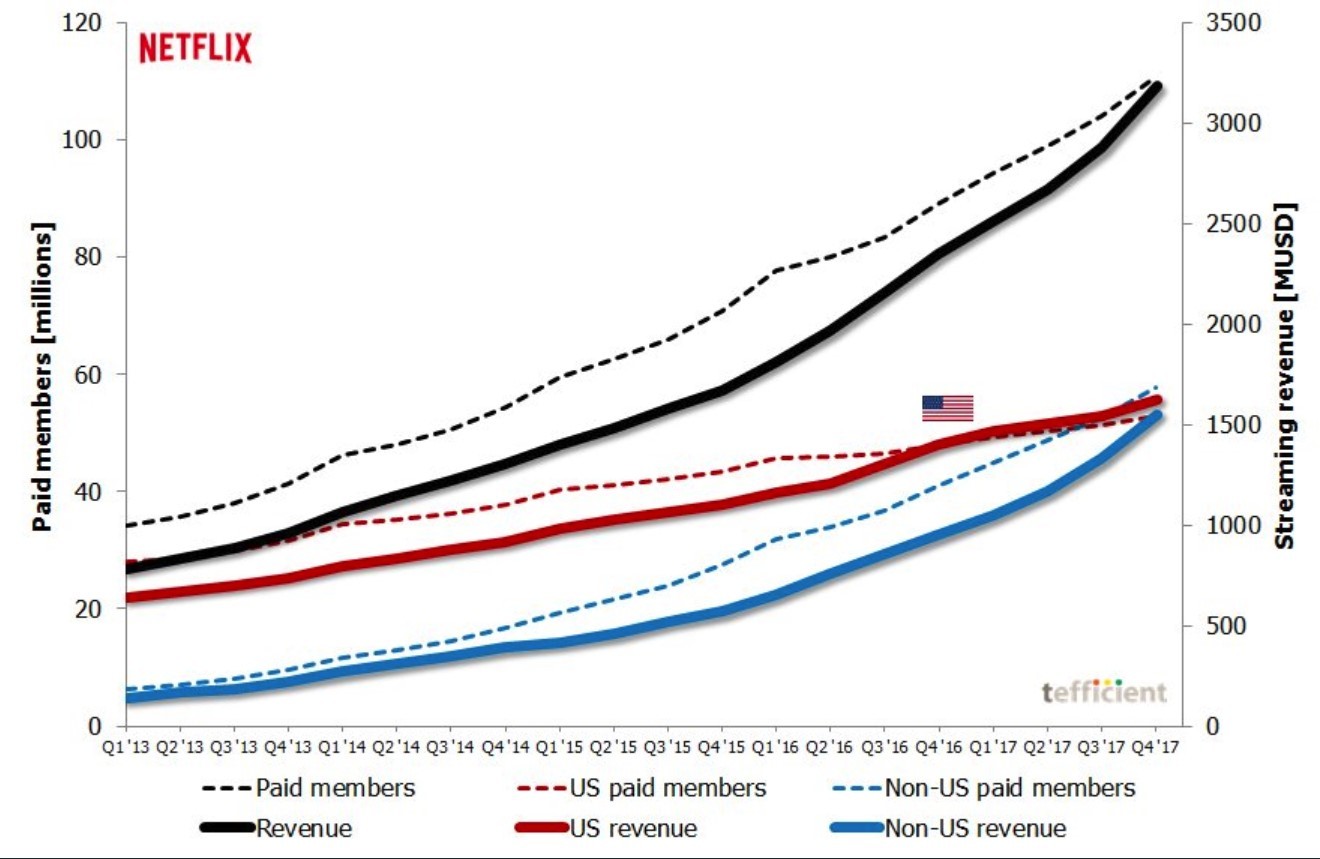 There is a looming elephant in the room: Disney. In the near future, Disney plans to pull its content from streaming services and launch its own streaming service to compete, creating a potentially formidable competitor.

It's easy to discount Disney here, but it owns a dizzying array of beloved brands: Star Wars, Marvel, The Incredibles, Cars, and so on. What we don't know is if it can execute on technology and marketing — which Netflix is proving to be a differentiator.

What's clear from these results is that Netflix may be able to stay this using what it's learning right now: people love new ideas and original content, not just reboots of stuff perpetually. Disney is good at nostalgia, but Netflix is better at backing new bets.

Intel: stop deploying patches
Hey remember that big scary Intel processor bug everyone told you to patch immediately for? Well, now Intel is telling corporations to wait, because it's causing widespread reboots at random. Computers, how do they even work?

German board games are now everywhere
Board game addict here: the Germans make the best board games, and here's why. Now I feel like playing Catan.