Firefox gets a second lease on life 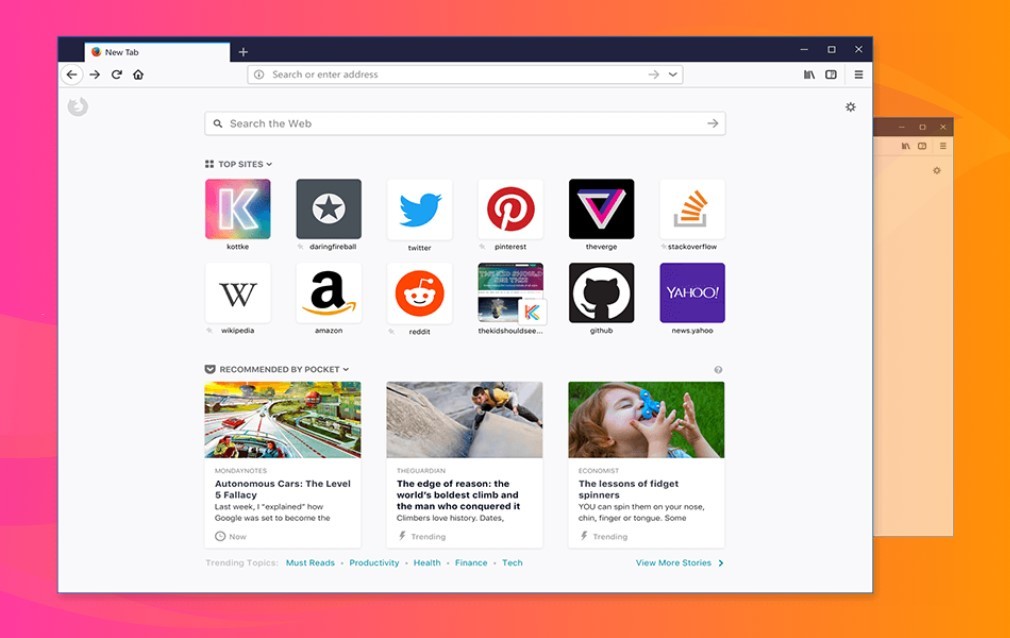 Firefox is one of my earliest memories as a piece of software I swore by for many years. I distinctly recall installing a "pre-1.0" release of Firefox and being blown away by it in the early 2000's because it was fast, had tabs (a fancy feature at the time) and extensions out of the box.

I used Firefox for years until Chrome came along. Somewhere along the way Firefox became bloated, required constant restarting for updates and extension installations and just generally slow. Chrome, a new project from Google, was a lightning quick browser like we'd not seen before -- and it didn't require restarting for extensions!

The rest is history you probably know: Chrome decimated the browser competition and now hovers at over 50% of all browsers used.

That's a testament to both how good it was at the time, how bloated Firefox got, the stagnation of Internet Explorer (which, at its peak circa 2009, was more than 70% of all browser traffic on the internet) and that Microsoft wasn't allowed to force IE on you anymore.

Firefox, meanwhile, has died a slow attrition death. At its peak more than 28% of internet users chose Firefox but today it's less than 10% -- even Safari has outpaced it with the rise of the iPhone.

Yesterday Mozilla rebooted Firefox with a new version called 'Quantum' which rips out the core of the browser and bases it on a speedy new engine. Not only is Quantum fast it's also privacy focused, which Mozilla touts as a large advantage over Chrome.

What's impressive is that these are not just wild claims -- it's noticeably better, consumes less RAM and spins up your CPU less often than Chrome does. I've been using Quantum for a few days here and I had expected a marginal improvement over Chrome but I've actually come to prefer Firefox (surprising even myself).

Not only are there these direct performance improvements, Quantum is perceivably faster as well, because it prioritizes user interactions with the browser and responds to them with priority.

It also contains a number of improvements over Chrome and previous Firefox versions that I've been impressed by, notably that you're able to run multiple 'profiles' within a single window to separate your work and personal lives.

Also, Firefox can now run almost every Chrome extension out there thanks to the open WebExtensions standard, which gives it a serious leg up by removing friction to switching.

Quantum is an interesting exercise in what happens when an organization realizes it's being suffocated by the competition. Mozilla has done some great work here pivoting what was on track to be simply history, but browser competition is key to an open internet and reducing any one party's control over it.

It remains to be seen if users care (I suspect they will, particularly with so many complaints in recent years about Chrome's memory hogging), but it's good to see the industry fighting again. I really recommend taking Quantum for a spin, I was impressed and you might be too.

Filling an awkward developer gap, Twitter launched paid APIs yesterday that will allow developers to scale up their apps.

For many years Twitter's API had a noticeable problem: it was usable on a small scale, but as soon as you had a small handful of users they'd suddenly cut you off and demand expensive enterprise pricing to continue accessing it -- because they didn't want to lose ad revenue from anyone consuming the service at scale.

That meant developers basically... gave up on Twitter, which lead Jack Dorsey to promise a renewed focus on allowing developers to use the platform and have trust that they could scale up there.

Fast-forward to now and these APIs are here, which allow entire categories of apps that Twitter banned for years. Developers can now access a search API going back to the beginning of the service, real-time tweet firehoses and more.

Why it matters: Twitter appears to understand that it's more than just an advertising network but a utility for conversation, and this is a step in the right direction to get people building new use cases for it again.

The Story of a New Brain
What if we could upgrade the 'OS' of our brain? New brain scanners might make it possible - an interesting read about the weird future of mind hacking.

Qualcomm turns down $103 billion offer
Well, that takes some stones (Qualcomm says its worth more than that).