2018 is upon us, and as always, a new year is lead by the Consumer Electronics Show (CES) which can be considered to be either a parody of technology and where it thinks it's going to go, or a look at the future of the industry.

Here's a set of the areas that I suspect we'll see a large focus on in 2018, and what that means.

We're nowhere near the end of the cryptocurrency hype train, but 2018 holds much in store for digital currencies. Over the last few weeks we've seen the peak and trough of Bitcoin, massive investments in alternative coins like Ripple, and others.

It's difficult to predict anything in this space because it's incredibly volatile. We're far from the end of crypto-mania, and we'll see massive amounts of people investing in any new coin they can, irrational or not, over the next year. Get ready, however, for more stories about people losing their homes because they leveraged it to invest in Bitcoin, and the stories about the folks who got rich at the same time.

Much of the drive for Bitcoin, I suspect, is due to millennials' distrust of banks. Millions of dollars are being poured in by people who are tired of poor returns on savings and are weary of banks entirely — people would rather trust big tech with their money, and I believe much of the investment in cryptocurrencies are in the hope that technology might solve banking by resetting currency entirely.

However vain that may be, crypto will continue to be a major theme this year. One thing is for certain: we'll see a lot of amateur investors lose money as the market moves quickly and irrationally, particularly as Bitcoin now appears to be reaching the masses (well, at least my parents).

The battle for voice

Amazon, Google and Apple are going to nothing short of full-on platform war in 2018, with the next frontier: voice. As Amazon is quickly owning the category by shoving Alexa into fridges, toasters and cars, others are likely to struggle to push into the space — in the US, with an expected 70 percent of the market, at least.

It's easy to discount voice controlled speakers as just a fad, but their sell-through rate is astounding, particularly because the price of entry is so low with Echo Dot and Google Home Mini now retailing for around $30. Given they're a gateway drug for the smart home, I expect manufacturers will be cramming Alexa into any device they can this year, and that Amazon will begin acquiring a host of smart devices in an attempt to build out the platform.

The big question mark remains HomePod: if and when Apple ships the smart speaker, will it have a market at the $399 price point, and will it even be worth using with Siri onboard? It's unlikely to be a 'failure' but my expectations for Apple's ability to extend Siri and build a device that's useful beyond just listening to great quality music are fairly low — especially given most of those homes will already own competing speakers. 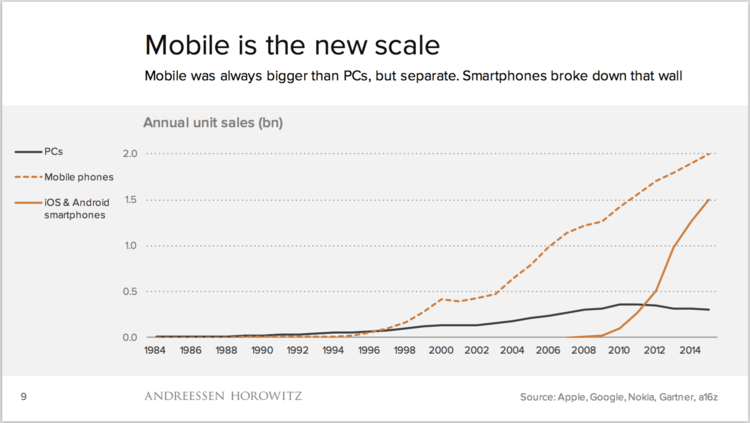 As the new platform war begins, an old one dies: 2018 will likely be a year that smartphones plateau in terms of both sales and features. We're now more than ten years into carrying computers in our pockets, and the changes are now arguably not much more than incremental, even on full-refresh years. I've argued previously that competing smartphones are nothing more than slightly different rectangles at this point, and in 2018 it's easier to freely switch between ecosystems than ever.

Most telling will be Apple's earnings on January 30, where we'll learn how the iPhone X performed in the market (analysts say not good, but they're not particularly reliable). As with PCs, smartphones have reached a phase of maturity that means consumers don't need to replace them every year, as they last longer and feature updates become less about revolutionary changes people can't live without, instead focusing on iteration of existing ideas (like Face ID) and improving on them gradually.

What we'll likely see as a result is smartphone makers doubling down on smart ways to convince you it's worth upgrading anyway, through upgrade programs like Apple's, which locks you into a monthly fee in exchange for a phone and makes it less of a decision to get the newest models. For phone makers, ecosystems of software and ambient hardware like smart speakers will prove to be the important factor in keeping customers buying and using their products.

Many markets are reaching saturation, just like the PC saw a decade ago, and companies like Google are already doubling down on emerging markets where the installed base of devices isn't yet too high. At almost all phone hardware events this year, expect iterative performance improvements (particularly on the battery front) and a focus on how the device unlocks other experiences rather than much to say about the hardware itself.

Another day, another hack. As the Russian-US election hacking scandal continues to unfold, 2018 is likely to be a year where we reach new levels of cybercrime. It feels like forever ago, but 2017 brought us WannaCry, which held millions of computers to ransom for Bitcoin — expect even more of this.

Sophos' 2018 report believes that large ransomware outbreaks will be responsible for much of the damage done to computers this year, with Ransomware-as-a-Service products popping up (yes, really) and consumers less prepared than ever. The 2016 Sony hack was devastating, but I suspect only a taste of how a large-scale ransomware operation could devastate a Fortune 500 company. All it takes is a few unpatched machines, and we've seen that despite these horror stories almost nobody patches to the level they should.

All eyes will be on Snap, as one of the largest 2016 IPOs that's burning money at an astounding rate while failing to perform in any meaningful way. By the end of last year, Snap will have spent over $1.1 billion on acquisitions, attracting users and other costs with little to show for it other than a lot of unsold Spectacles inventory.

Snapchat will push to defend its position against Instagram aggressively, and attempt to prove to investors that Facebook-level growth is still possible. That might actually happen, as Evan Spiegel has proven repeatedly to have a product vision that's bold enough to stun the market, but investors are going to remain skeptical as the company hasn't reported a single positive quarter since going public.

Snap argued on its earnings call earlier this year that the users it has, many of which are teenagers, can’t be reached by television or print advertising. Almost all of the house is being bet on the company as a way to reach that young audience, but there's little evidence (or statistics) on if that's actually plausible.

We're going to see Snapchat in the news a lot this year, and almost certainly it'll be because pundits don't give it any leeway anymore: it's the new Twitter, unless proven otherwise.

This isn't exhaustive, but I'd love to hear what I've missed for 2018 — are there any big trends that will shape the way tech is moving forward? Jump into today's Discuss thread here and let me know.

It's January and I've already found the worst post
Here's a smart lock startup that raised a ton of money, never released a product, hired a ton of employees and ran out of money weeks before hitting the market. I'm not sure if the tone of this post is what grates me the most, or the fact that the company appeared to have no contingency plan when an (acquisition!) deal fell through weeks before it was due to hit stores.

Web trackers now exploit password managers
A new trend from advertisers: tricking your password manager into divulging details about other websites while you try to autocomplete your login details. Hidden fields on pages are designed to appear like email address fields so they can steal your details and retarget you later — wild.

The robots are coming but Sweden doesn't care
Automation is upon us and many countries haven't even begun discussing its implications yet. Sweden, however, is OK with robots replacing jobs.

CloudFlare's lava lamp wall encrypts the internet
I believe this story is old, but it's still amazing to me: there's a wall of lava lamps in CloudFlare's offices which are used to generate entropy to secure the entire internet.