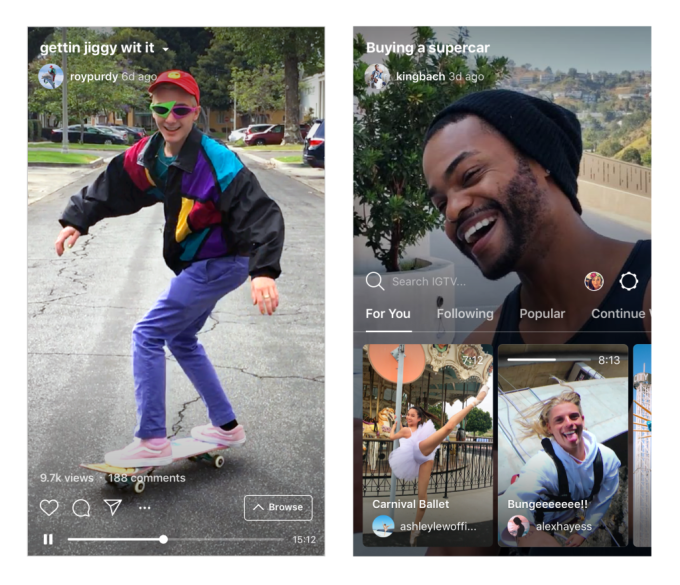 YouTube has something new to worry about: Instagram's going in on video and wooing creators with a whole new format: Instagram TV.

Here's the idea: Instagram wants to capture and capitalize on that sweet media money that Snapchat went after with its Discover feature, which surfaces original content for the service and provides something to scroll through when you're bored.

Instagram TV is a new dedicated app, but it's also accessible within the core Instagram app as well, and targeted squarely at this segment: it'll spotlight Instagram celebrities, is heavily curated, and supports video up to an hour in length. You can watch both on the web and mobile, and even upload from either platform.

Essentially, it's a mobile-first YouTube. That's a problem for Google, which has so far been largely unchallenged in the space, because vertical video makes so much sense on mobile devices that Instagram's focus on it might drive people to use it even more.

It's a big bet on people wanting to embrace holding their phones for longer, and watching more content on their phones than anywhere else: just open the app, and it'll keep on playing. More than that, however, it's a shift beyond Facebook's own flagship product.

With a billion active Instagram users, IGTV is a declaration that Facebook's entire focus is on Instagram, and it's essentially the new 'Facebook' for the company. Instagram has continually seen features slathered on, from stories to AR filters, over the last year, and now receives more focus than the core product does.

Facebook the product is now simply a means to an end, and Instagram is the new Newsfeed. Facebook.com is a way to keep people in orbit and ultimately connect them with others to drive them toward other properties owned by the company, like Instagram and WhatsApp.

Like M.G. Siegler pointed out last week, it isn't about Facebook dying, it's about the product eventually becoming rotten, and largely irrelevant:

This will matter more and more as the “Facebook Nevers” grow up. The network was never going to collapse because everyone left, it was always going to fade over time as young people didn’t replenish the data it needs. And so it will wither, ever so slowly. If you look closely, you can see it already, even as it still looks so ripe.

It'll be fun to watch this play out. IGTV might fail, but it appears unlikely, because Instagram is a surprisingly beloved brand that continues to grow at an insane pace. What remains to be seen is if it can pull off yet another pivot, but if the shift to stories is any indication... it won't be an issue.

Worth noting: this is dropping on the exact same year that Google and Apple are pushing to make you use your phone less with time-awareness controls, which could, but probably won't, cause an issue.

No, it isn't GDPR, which was actually a pretty great piece of regulation, but something a bit scarier: Europe wants to require platforms to screen everything users upload for copyright infringement and block it before it makes it online.

In other words, this could be the death of memes.

The law essentially does two separate terrible things: first, it targets "news aggregators" and requires them to pay a license to even use a snippet of content like an embed, which would essentially kill Google News, Reddit, and many other services immediately.

Second, it requires filters that kill copyrighted uploads in transit. Platforms would be required to figure out what's legal and what isn't, and under the new law, it would make things like memes difficult ground as a single copyrighted component photoshopped into an image could result in it being blocked.

It's wild to consider this in practice, even technically speaking, because it's just not feasible on any meaningful scale. Platforms don't have the resources or the tools needed to do this, and such a rule would create censorship at scale incredibly simple.

Europe voted to push on with the legislation to the next phase, despite internet architects and scientists including Sir Tim Berners-Lee, Vint Cerf, Bruce Schneier, Jimmy Wales and Mitch Kapor saying that the move could essentially kill the internet as we know it.

In two weeks, the 751 representatives of the EU will vote on the final piece of legislation and if it passes, we'll have a nightmare on our hands. If GDPR was a great step that startups failed to follow closely, this is something of a regulation belly-flop, and may result in them exiting Europe entirely.

The town that Amazon Prime built

Disney rebuffs Comcast with new deal
$71 billion for 21st Century Fox. Holy crap, the giants are terrified of Netflix, and will pay anything to compete.