The fight for the modern office

Productivity tools are hip again. Airtable, a startup building what I'd consider the future of spreadsheets, just raised $100 million to keep on hacking away at the problem. Coda, which is solving a similar problem in a vastly different way, also raised $60 million. Dropbox Paper tackles modernizing Google Docs, and Notion combines the best of both worlds into a single app.

There's a new race to modernize your day-to-day tools that's happening in the background, because they've largely stagnated since Google Docs showed us we could all edit the same document at once. G Suite stole lots of ground from Microsoft Office over the years, forcing Microsoft to change direction and embrace the cloud, but it didn't exactly re-imagine what a modern document looks like: it's still just an A4 page.

Airtable and Coda solve an interesting gap today by combining Excel with Access: the power of a spreadsheet with a database underneath, except you don't actually see any of that.

You create your document, figure out how you want it to be structured, and boom, everything is relational, re-usable, and any data type can be embedded -- and now you can create different views to better interpret the data. It's not just a spreadsheet, because you can link to that data in other documents, pulling it in for reuse, rather than re-entering it repeatedly.

Notion takes this and twists it around to let you put a database anywhere: it's just a blank canvas. I've written extensively about this here in the past, but it's an exciting new hybrid of tool that puts everything in a single place: no more switching between sheets and docs.

Having all this data stored in this way means you can embed it, remix it, and use it to your liking in multiple ways. A great example from my workflow is this dashboard I start each day with, which pulls from multiple different spreadsheets to create a quick place I check every morning to see what's on my plate: 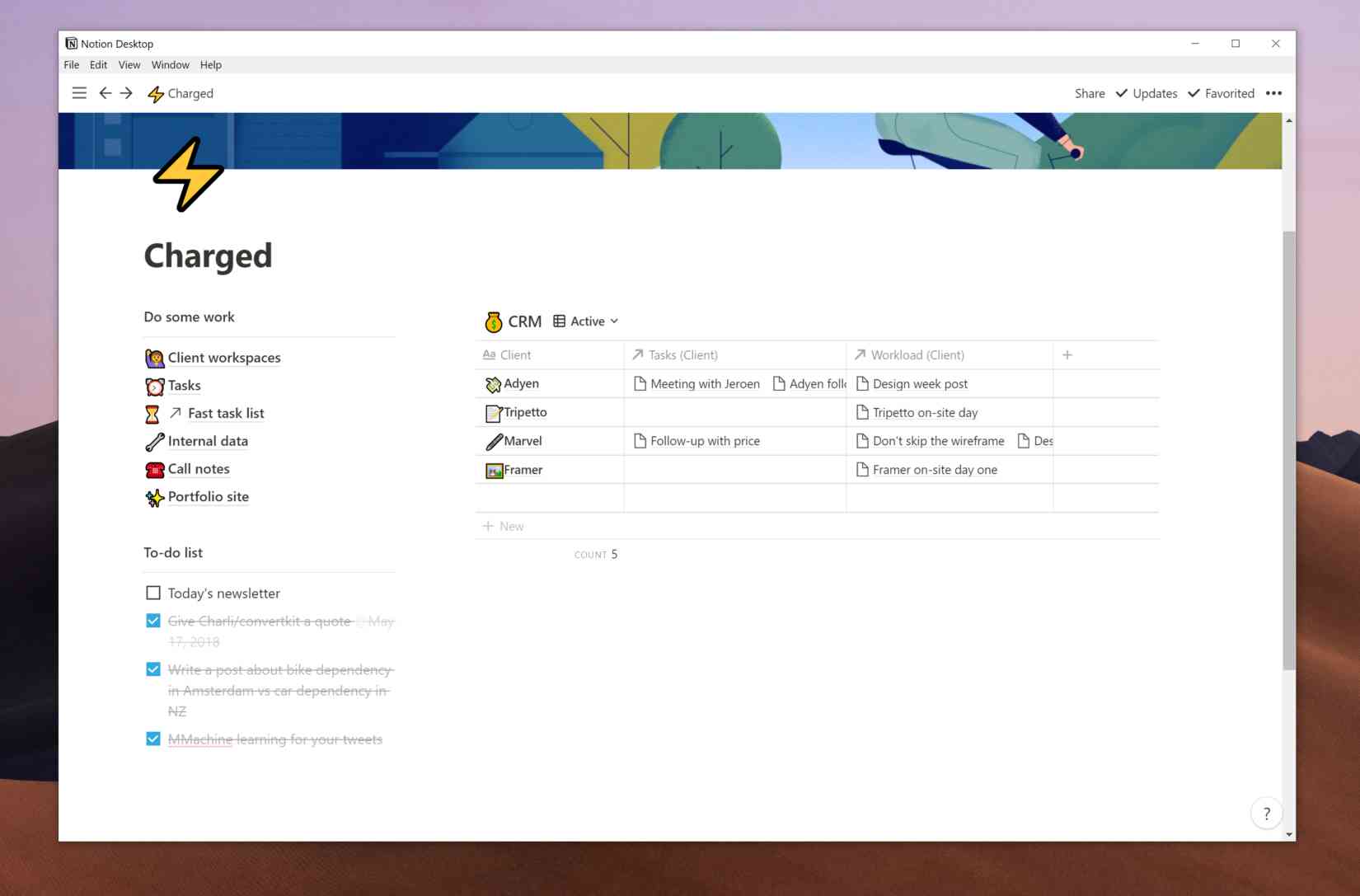 The game changer here, however, is that these tools are able to tap into other backends and APIs to pull in data, or transform it into something else, rather than leaving it to you. Airtable Blocks, for example, essentially allows you to build full-on apps out of your spreadsheets, providing things like Maps or Translation right on top.

The idea of all of these things is that they can supplant your traditional spreadsheet and other office tools as the future of getting things done. I love them and have already embedded both Notion and Airtable into my day, but it's a long road to get there: most people struggle to adapt to even basic software updates, let alone an entirely new idea.

Slack started this race by modernizing a relatively boring, seemingly solved idea: chat, and showing that reinventing the wheel actually can be extremely profitable. As people become accustomed to Slack, I believe they're willing to explore other improvements to their workflow. Airtable, Coda et al arrived at precisely the right moment for it, too: we live in a browser for most of the day anyway.

My biggest question from here is who gets snapped up by Google or Microsoft first. I think they're painfully aware that their tools dictate a particular, old-world way of working, but they can't change them too drastically lest they accidentally create the next Google Wave. Perhaps a new tool, in parallel, would be a great acquisition? Time will tell.

Elon Musk gets approval to build the new internet

This is an exciting milestone for SpaceX's new connectivity project: it's just won approval to operate 7,000 satellites, which will provide 'Starlink' wireless internet access from space. The FCC gave the company the green light today for Starlink, along with a handful of other startups hoping to launch similar projects.

Starlink is essentially a constellation of thousands of tiny satellites, which are now possible because of two paradigm shifts occurring in the industry: the commoditization of electronics driving prices down dramatically, and the ability to ferry small, shoebox sized objects into orbit on a regular basis.

These new satellites fly closer to Earth, and are able to blanket wider regions with coverage, particularly in rural areas that are underserved today. It's easier to beam down data from up above than it is to install enormous, expensive cellular towers that have to deal with difficult terrain and signal loss.

If you're interested in learning about the market forces that are making all of this a compelling option, Planet Money did a fantastic podcast last year about how easy it is to launch a tiny satellite into space. They actually pulled it off!

There's lots of good reasons for the allure of satellites: physical infrastructure is expensive to install, lives in the ground, has to be maintained, and there's lots of things in the way of installing it. Satellites are disposable, easy to replace, and there's not that much in the way up there.

With theorized speeds of up to 500mbps by some companies, even if it is slower than physical infrastructure, companies like Comcast, Verizon or your local cable company might consider stopping laying physical cables given how much capital they expend on digging holes in the ground for it.

We still have no idea if people actually want magic space internet, but the race is on. Maybe it means you'll get better coverage to post those Instagram photos from the middle of the woods?

Facebook disputes basically all of the New York Times' claims
Did you expect anything less here? Mark Zuckerberg spent hours on a conference call taking reporter's questions, claiming he had no idea about the opposition research going on under his nose, and much more. Sheryl Sandberg is claiming she didn't know about the lobbying firm, and was unaware of what was going on... despite it being her job to do this stuff? I'm not surprised that they're claiming it's inaccurate, but who's actually responsible at this company if they didn't know?