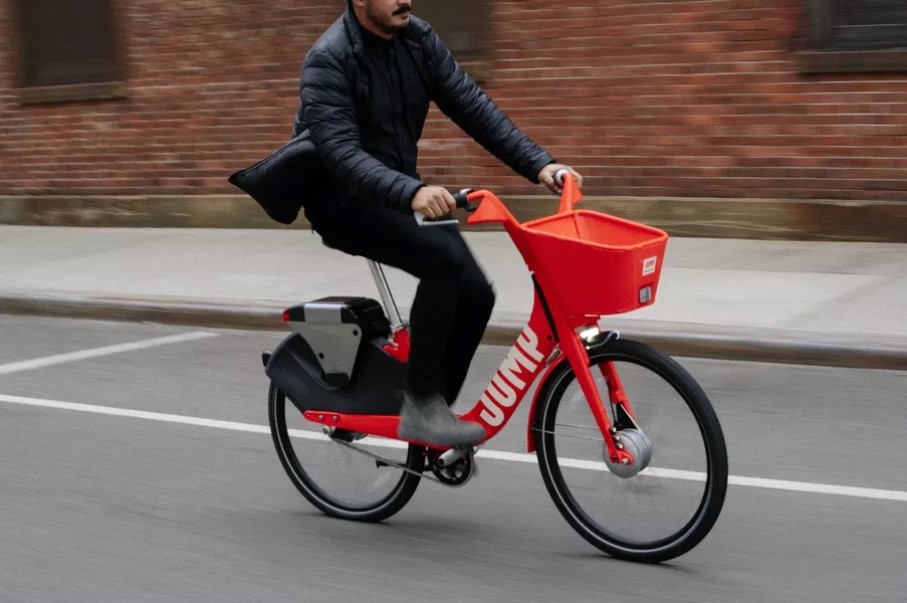 Dockless bike sharing is all the rage, but I like this alternative: Uber is partnering with Jump bikes in San Francisco to offer bike sharing right inside the core Uber app. I've actually experienced Jump, which is heavily deployed in Portland, and it's awesome.

Here's why: unlike those dockless bike sharing schemes where it's fine to just leave junk anywhere you like, Jump is a nice middle-ground. It focuses on building bike racks in places where people will use them and users are encouraged to drop the bikes off at them — but it isn't compulsory. Instead, you can pay a small fee to park anywhere you like, and other users of the service get credit for moving the bike back to a rack.

I used these things for a week in Portland, and have also used their competitors like Flickbike, MoBike and others, but the latter group is more focused on throwing their junk everywhere — they don't really care where you leave it (or what state they're in), leading to a problem, particularly in Asia. 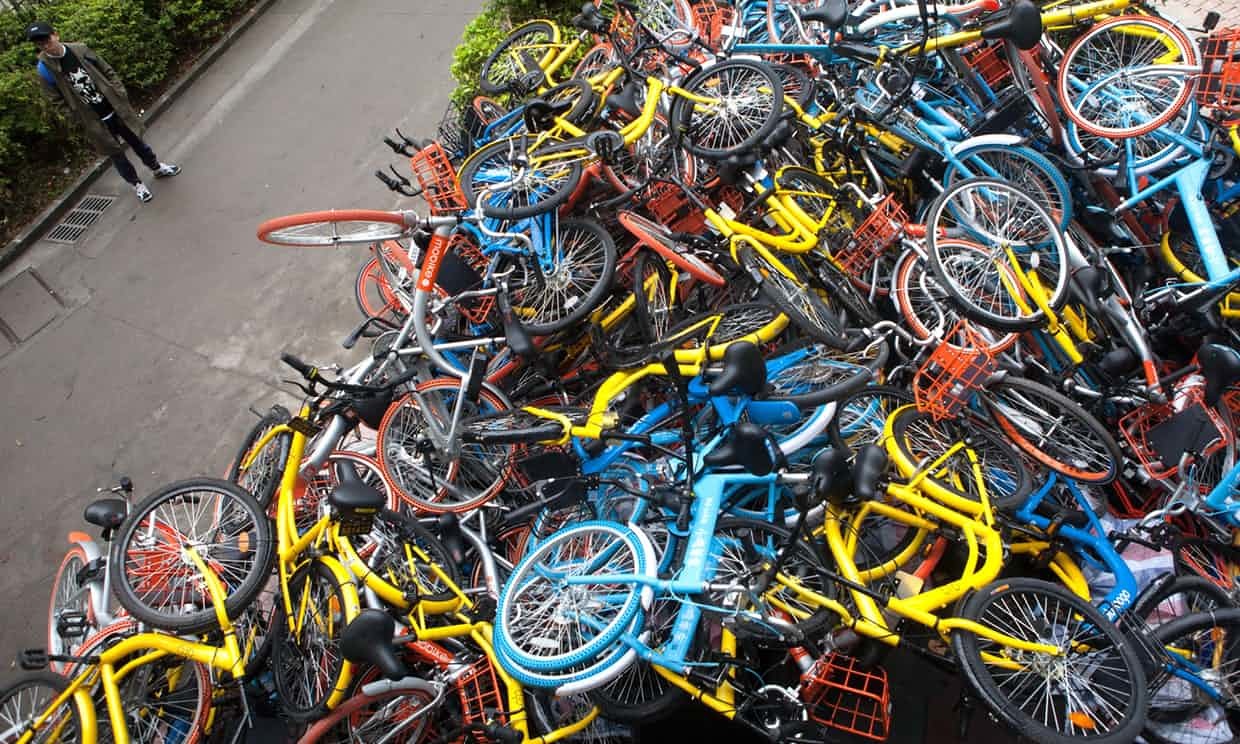 Here in Amsterdam, the bike capital of the world, bike sharing came and went in a flash — ultimately it was banned by the city to avoid the rubbish problem as it quickly became clear how much of a nuisance they were.

The benefits of bike sharing are clear: people actually use these things if they're around in a big enough way to make them useful, pollution drops notably as a result, and cities can be revitalized. It's interesting to see renewed interest in bikes, particularly to solve the last mile problem that Uber and others have.

One of the challenges with these dockless bike shares is convincing people to download an app, and then convincing them to keep using it. Uber is on millions of phones already, and could almost guarantee the success of such a scheme overnight — if given high enough placement (and I don't see why Uber can't/won't build this out themselves if it's a success).

It's that time of year when technology companies report earnings, and Facebook's came in for Q4 2017 last night. Get this: Facebook chose to show fewer viral videos and usage fell more than 50 million hours daily — yet somehow, it's a good thing.

Facebook has reprioritized around "time well spent" as we saw with recent planned News Feed changes, and it's working: instead of having those 50 million hours, people were more likely to engage in a "meaningful" way.

If that works (and the decline is not a trend) it could be a huge money maker, especially given Facebook's average advertising price went up 43% in 2017. Given the company now reaches 2.13 billion people, along with 1.5 billion on WhatsApp, that's a huge influx of cash. 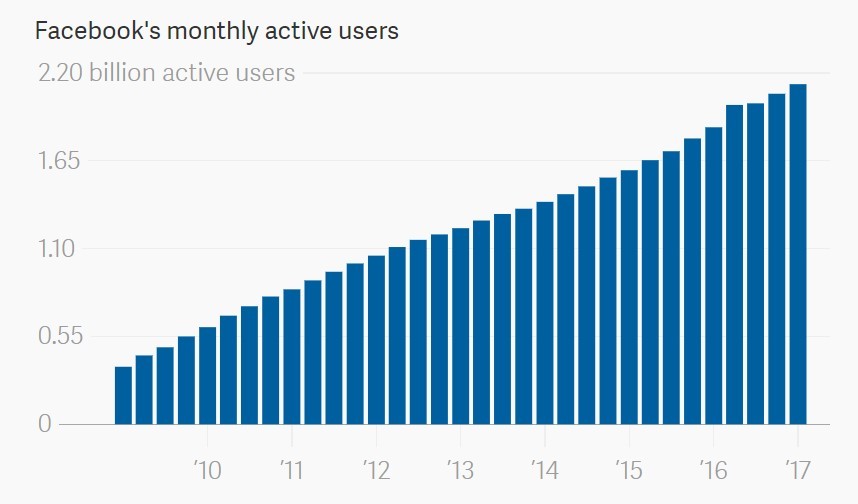 The big hurdle for 2018 is "fixing" the perception (and reality) that much of Facebook engagement has become toxic. In Zuckerberg's own words: "2017 was also a hard year. The world feels anxious and divided -- and that played out on Facebook."

At 2 billion users, it's an interesting conundrum: Facebook has more reach and power than any government or entity in history, and now sees it as a moral duty to take control of how people share on the service. Promoting user well-being is a good step, but it's always going to be a company in the end, so will only go so far in that pursuit.

What's different about Facebook is that Zuckerberg controls both the board vote, and the company itself — investors can't just get rid of him, and he can veto anything he likes. It's rare to hold a majority at such a late stage, but Zuckerberg holds 59.7% of voting power in the company.

Some investors aren't happy with a focus on improving user health, but it doesn't matter in the end, because Zuckerberg decides where the ship is headed with enough power to do so without fear of being fired by his own board.

It's interesting to view all of this through another lense: Facebook needs to resolve this toxic perception, but it also needs to get people to login and share again, which is a whole different problem.

Side note: I think about deleting my account regularly, but a few things keep me there. First, events are still the standout feature I use, and second, being 18,000 miles from home it's a useful way to keep in touch with friends. At least Messenger can be used without a Facebook account now!

AMD is back at profitability (seriously!)
One of the biggest modern issues we face is a total lack of competition in the CPU and GPU space — Intel holds more than 95% of the market, and as we've seen with the recent security flaws, that can be a problem.

AMD is back in the game after a miserable few years with its new Ryzen chipsets, Vega GPU technology and more investment from cloud providers. Wild — especially when you consider that AMD also lost the GPU game almost entirely to NVIDIA by missing the machine learning boat.

Spotify's Stations experiment
I love this weird little app — a new experiment from Spotify sees a simple, focused app that presents great playlists to users for free. Surprisingly close to Pandora's territory, and a great way to find new users as it gears up for a 2018 IPO.

This conversation is going nowhere
Chatbots were the great craze of 2016 and 2017, but Digit, one of the companies that drove much of the hype and built chatbot tech has declared it dead. Bold move:

"We'll go so far as to say the promise of chatbots is dead. That is, if the potential we envisioned for them was ever truly alive. The technology to make AI-powered assistants truly useful is still far out of reach, and people aren't rushing to close that gap by adapting their behavior."