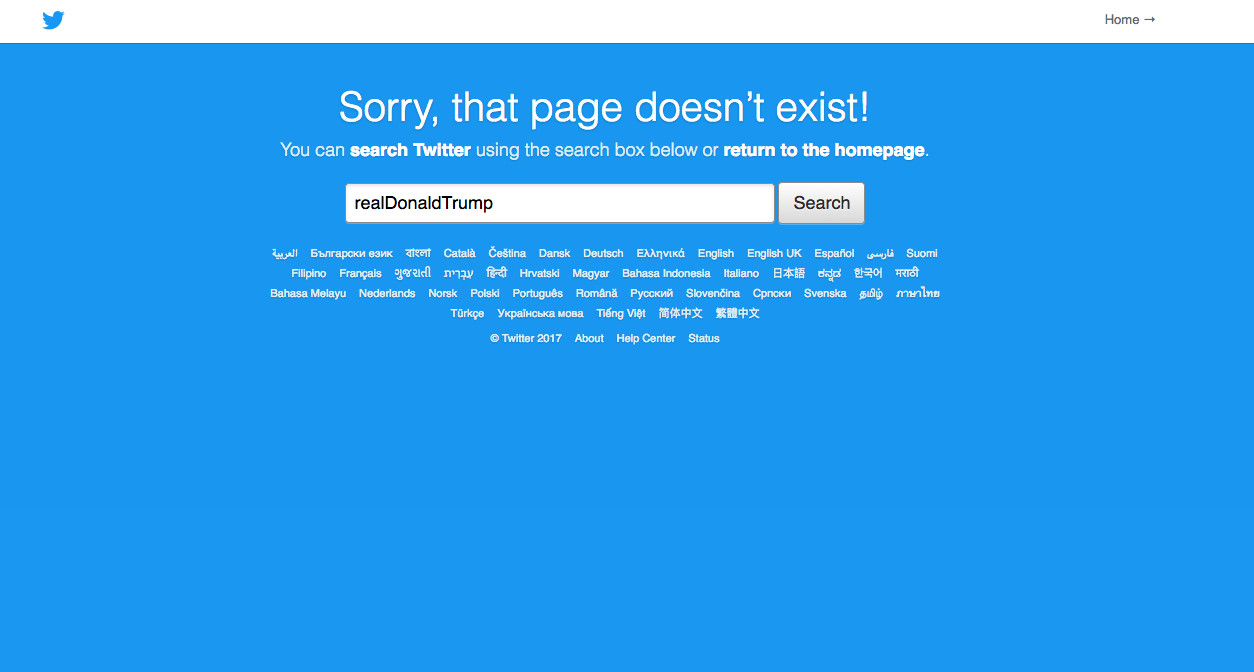 For eleven glorious minutes this morning, @realdonaldtrump didn't exist at all. If you visited the president's profile, you'd get an error warning it never existed - suggesting that maybe Twitter had taken action against people who argued Trump's style of tweeting was harassment.

Alas, the account quietly came back online with no explanation for what happened initially. Lots of speculation flew around that it could've been a rogue employee, an error or otherwise. Twitter, for its part, claimed it was "human error" in its initial response.

Ultimately, it turned out that the suspension was intentionally done by a Twitter customer service employee on their last day at the company. Yes, a customer service representative took perhaps Twitter's strongest reaction to anything on their own shoulders.

This really shouldn't have happened and couldn't come at a worse time for Twitter, which is busy defending itself in front of Congress over Russian ads, but begs the question: why can your customer service team suspend random world leaders at will? Even further to that, how many people at Twitter (which is 4,000 employees), can take such an action?

Anyway, it was fun to pretend for a few hours that Trump's Twitter didn't exist. I'm not in the camp of believing he should be suspended, and even if he was it would be something akin to political suicide for Twitter - a public company - to do that. But hey, it was a throwback to a far kinder, old Twitter.

Apple's chipmaker is not happy. Apple sued Qualcomm earlier this year for charging it billions in royalty fees over technology it had nothing to do with, such as Touch ID, which Apple designed in-house. Now, Qualcomm fired back, saying that Apple has been angling for access to secret source code for its modems - even going as far to CC Intel engineers on emails requesting that code.

That's of particular note because just a few days ago rumors surfaced that Apple is working feverishly to build Qualcomm out of its supply chain entirely for both iPad and iPhone in the immediate term. That report comes, apparently, from Qualcomm withholding the software needed to test its chipsets even though they're embedded within existing (and new) devices.

Qualcomm's scale in this space is of note: it makes more than 50 percent of all smartphone modems, followed by Mediatek on 25 percent and Intel at just 6 percent. Apple going to either of the alternatives would be devastating for Qualcomm and a boon for whoever it chooses, so this seems like a lose-lose for Qualcomm.

Why it matters: Qualcomm is something of a bully, and business practices like this lock out big companies along with smaller ones too, which can stifle innovation by driving prices far too high. This lawsuit might help make the space more competitive.

Apple's earnings were stellar (are you surprised?)
Rectangles sell well. Sales were strong over the last quarter, the iPhone X is here and Apple is on track to be a trillion dollar company. It doesn't even matter if the iPhone X is a hit or not - it will sell like crazy because it's such an enormous iteration. Expect the next quarterly earnings to be unprecedented (unless there's OLEDgate or something).

Bitcoin transactions use a ton of energy
A report from Motherboard says a single transaction now uses more energy than it'd take to power a home for a week, which is kinda insane if that's the future of money.

A bunch of grownups are arguing about emoji
The Unicode consortium is the party responsible for choosing which emoji should become "official" and end up in the set found on your phone but it appears the organization is pulling itself apart over a frowning pile of poo.