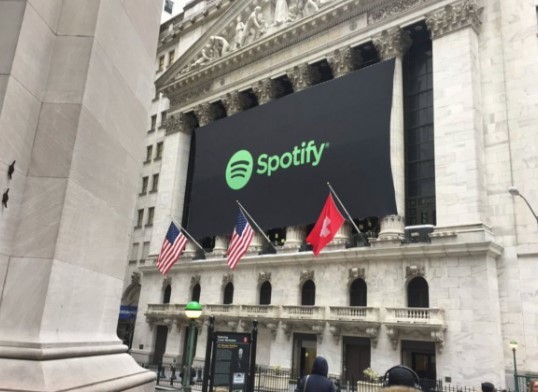 Not only did Spotify pull off a successful direct listing yesterday, it managed to get on the list of top ten most-valuable public companies on day one.

At the end of the day Spotify was worth about $27 billion, with the closest competitor on the list in recent years being Snap, which debuted at $28.9 billion. In other words, a huge success!

Spotify nailed the direct listing yesterday precisely because it was completely normal: no wild fluctuations or crashes, just... a publicly traded security.

Shares opened at $167 a piece, not bad for a company with a wildly unpredictable share price. If anything, the IPO has given us proof that technology companies may not need Wall Street's traditional bankers after all — if you have brand clout at least.

Perhaps my favorite part of yesterday was something else that happened: the New York Stock Exchange flew the Swiss flag instead of the Swedish by accident to celebrate the listing (did you notice that the first time?).

YouTube HQ was evacuated yesterday as a reported shooter wandered the campus — Twitter was ablaze with YouTube employees evacuating and posting live updates as things unfolded.

It's still very unclear what happened, however three people were injured as events unfolded and at this stage it appears no-one was killed. BuzzFeed has a good overview of the events themselves, and is actively updating with new facts.

This is not strictly technology news, but it was concerning how rapidly disinformation spread about this in real-time as it unfolded: nobody could keep up.

Casey Newton noted that one of the product managers at YouTube that live-tweeted the attack was targeted by hackers, and had his account hijacked almost immediately — while others actively worked to spread false facts:

The account hijacking seems to have taken place while Lavrusik and his colleagues were still near the scene of the attack: Lavrusik reported himself safe at 2:36pm PT, and the hoax tweets began posting just 20 minutes later.

The story is still developing, but I imagine it'll be discussed at length in the media over the next day or so.

Apple hires Google's chief of Search and AI
He'll be joining to run machine learning and AI strategy. Insert generic joke about Siri maybe getting good one day here — in all seriousness, this puts to bed the discussion that Apple can't attract AI talent.

Half of EU flights grounded because software
It's unclear what caused the problem, but the organization that looks after flight operations across Europe had a software snag that grounded ~15K trips. Ah, technology.

BlackBerry is suing Snapchat now too