The backlash against a $30/month email app 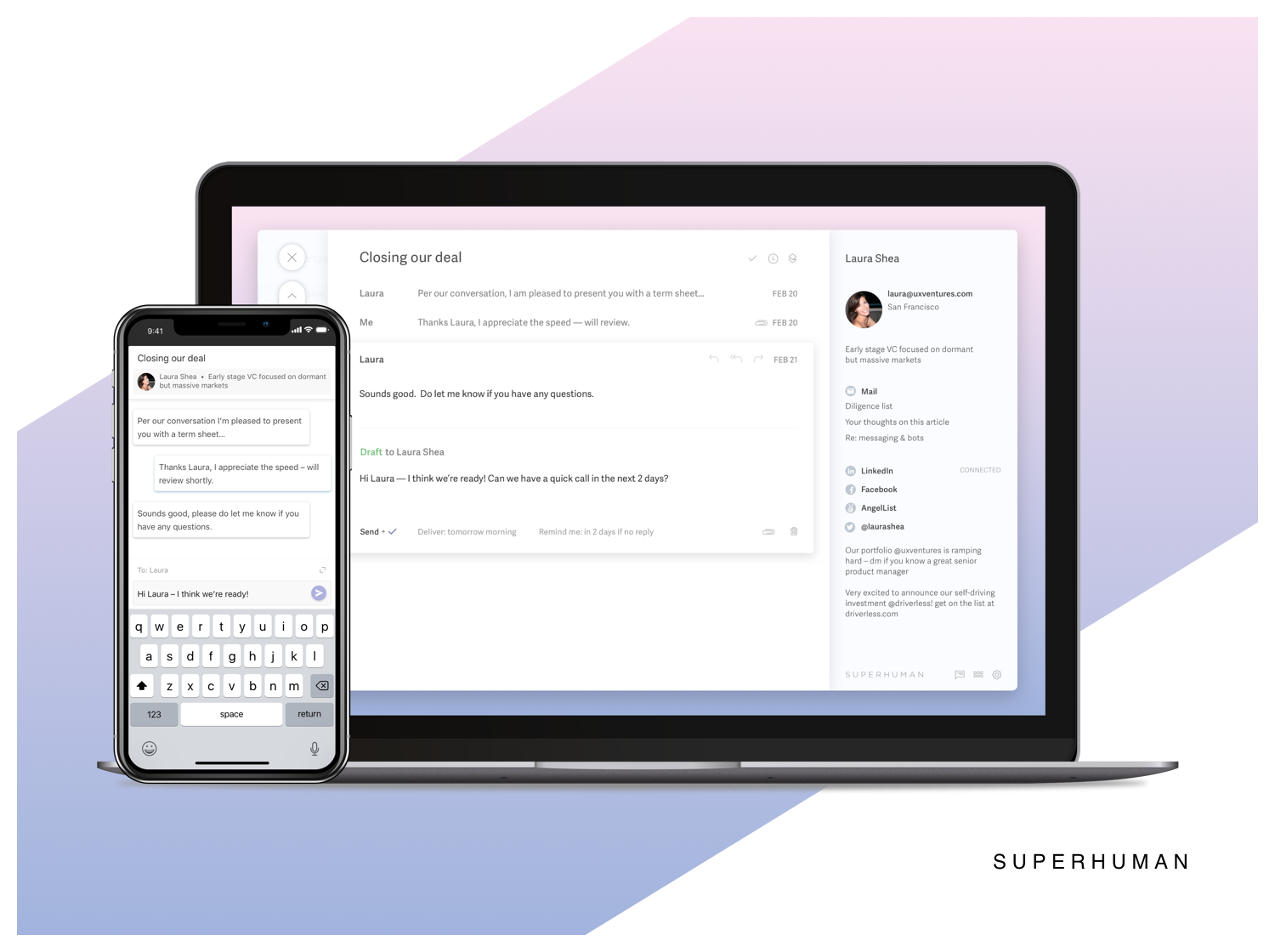 Superhuman, an email app that costs $30 per month to use, is all the rage right now. The sell is simple: it's the fastest email app ever made, heavily driven by keyboard shortcuts and saving seconds of time on the banal email stuff you do every day.

At $30, it sounds both outrageous—$30 for an email app?!—and a bargain, if you do a lot of email, or find email terrible to deal with, let alone just want to save time doing it each day.

We're only talking about Superhuman now, despite it having existed for a while, because this week The New York Times did a glowing profile of it, with a perfectly click-thirsty title: Would You Pay $30 a Month to Check Your Email?

As always, the answer is: some people definitely will. But, the article spawned a wave of interest and discussion about the app it hadn't seen before: could any email app be worth so much money per month, when something like a Slack subscription tops out at maybe $8 per seat.

The outrage at the amount of money was the first wave, which I'd argue was unfounded: as we've seen in the last few years, any third-party email app without a business model in the beginning ultimately winds up dead or in some horrible privacy scandal.

Email is hard, because users expect it for free thanks to Gmail—and it is a commodity! But Superhuman's selling point is that it's more than an email client, with specific ways of working that save people's time, hence why it costs so much. And, frankly, that's fine, if the app won't die in six months because of that.

But, what really blew up in the last 24 hours, and has Twitter in uproar on both sides, is a revelation that Superhuman also happens to track people without their consent, in a very different way:

It is disappointing then that one of the most hyped new email clients, Superhuman, has decided to embed hidden tracking pixels inside of the emails its customers send out. Superhuman calls this feature “Read Receipts” and turns it on by default for its customers, without the consent of its recipients. You’ve heard the term “Read Receipts” before, so you have most likely been conditioned to believe it’s a simple “Read/Unread” status that people can opt out of. With Superhuman, it is not.

By default, Superhuman tracks whether or not you open an email, and where you did that—without ever asking the recipient if it's OK, or even letting them know that's the case. It's true that this is an entirely normal thing in email marketing, and even many sales tools like Mixmax encourage it, but in the current climate it feels invasive.

There are two major problems here: 1) that Superhuman enables this behavior by default (I use the app and didn't even know about the tracking part), and 2) it's really, really hard to defend yourself against open tracking as a user outside of completely disabling image loading in your email client.

Enabling the feature by default, in a privacy climate in which people are much more sensitive to being averse to monitoring, was probably a mistake. And, it's one that could create dangerous circumstances for people as a result, which the post points out.

What I want, however, is to see better controls built into email platforms for these types of behaviors. If I don't want to be tracked on my email, for whatever reason, I should be able to easily block it (or at least monitor who is tracking me)—but it's near impossible today.

I use a Chrome extension called Pixelblock that detects, blocks, and names the trackers inside any emails I receive, but that only works on the Gmail website on a computer, not a phone or tablet. Google could easily build this in, and probably should, but I'm sure Apple will at some point instead.

The point of all of this is simple: consent, and an actual choice in the matter! Techcrunch has a great take on why this is even blowing up:

It is, and I do find it a bit amusing that I have to say this in twenty nineteen, OK for people to want to discuss this and to examine the trade offs in a product that makes other people’s privacy choices for them. This isn’t backlash, this is discussion, and it’s good.

I use Superhuman myself, and I'll certainly be disabling the tracking feature—as well as lobbying them for better controls for blocking trackers. Perhaps sometimes, just sometimes, it's nice to not feel watched.

After that almighty take, I present a few other things to click on:

China Is Forcing Tourists to Install Text-Stealing Malware at its Border
This is terrifying—though given I've been subjected to full device searches at the U.S. border, which feel worse, somehow I'm not surprised at all.

Windows users can now get Android push notifications on their desktop
It's fun to see what Microsoft is doing differently, and how open it is, now that

Cloudflare broke the internet (again) with a bad regular expression
The internet is fragile, and everyone makes mistakes.