Microsoft plans to ditch its own browser technology 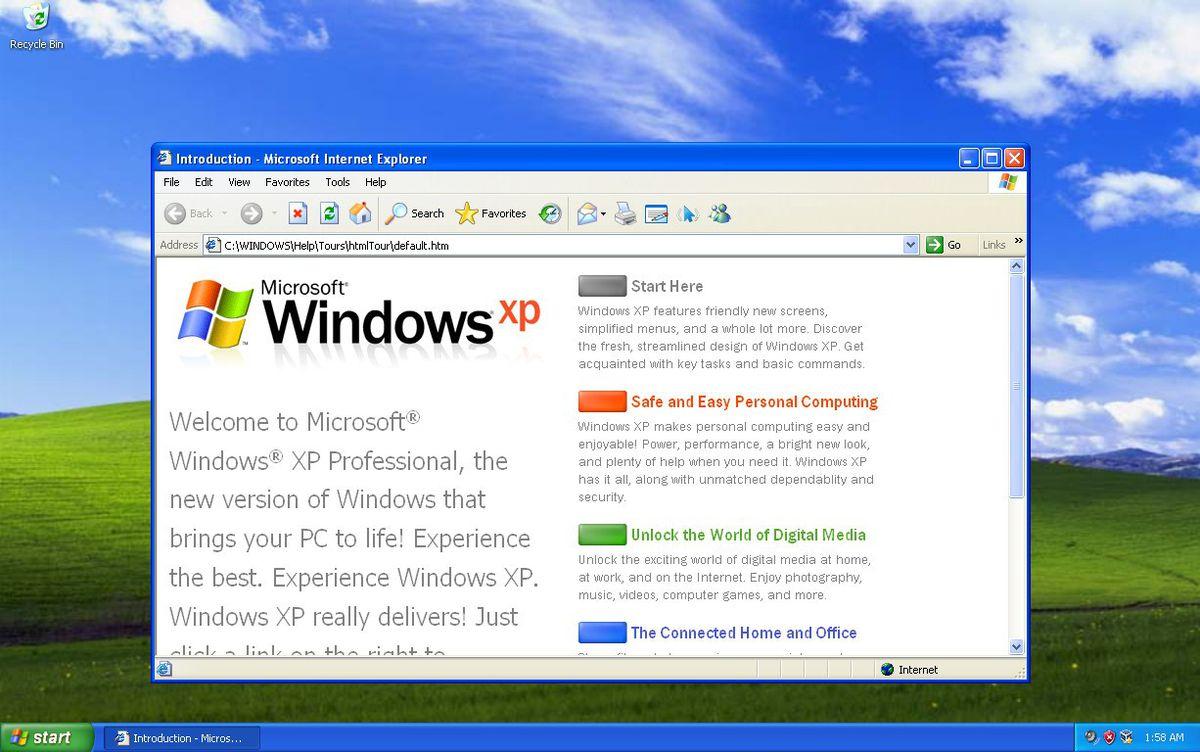 For more than two decades, Microsoft has pursued building its own browser technology, and it looks like that's coming to an end: multiple reports are saying that the company plans to switch to a Chromium-based rendering engine as soon as this week.

That's a huge shift, away from a proprietary, in-house technology that's been a core part of Microsoft's focus for so long. The 'browser wars' have been through so many iterations starting with Mosaic in the early 1990's, Netscape, then the modern fight, that it's surprising Microsoft is willingly conceding defeat.

Before we get into today's report, it's important to zoom out and understand how we got here. Here's a little bit of history, glossing over so many details because I can't possibly give what happened justice in an email.

Internet Explorer dominated the entire browser market in the 1990's and early 2000's, with the proprietary Trident rendering engine underneath. Today, it's new browser, Edge, is largely irrelevant.

At its peak in 2004, Microsoft's browser had more than 95 percent of all traffic on the web — which fell apart when the company found itself subject to antitrust rulings about the browser and new competition emerged.

Microsoft had a huge advantage back then in that Internet Explorer was bundled with Windows, which made it overwhelmingly the default choice for people. Every other browser, from Netscape to Firefox, had to convince the user to download it (and use Internet Explorer in the process). Later, it was forced to unbundle this and give users choice, particularly in Europe, which left an opening for new entrants to get a foothold.

For a while, it looked like Firefox would dethrone Internet Explorer as the browser of choice. I distinctly recall getting access to Firefox previews as early as 0.3, for the first time sometime around 2004 via a CD-ROM with a magazine like PC World.

Firefox was fantastic, and it grew to around 30 percent of all browsing traffic until Google debuted Chrome in 2008. Chrome used a new "V8" implementation of JavaScript and the open-source Chromium (Blink) rendering engine, but what made it stand apart was how fast it was compared to the competition.

Google utterly destroyed the competition by changing the way software was delivered, and uprooting the way new features were rolled out. Microsoft delivered Internet Explorer updates in major point releases, usually tied to Windows, leaving years between updates, while Chrome saw a new update as often as every few days. 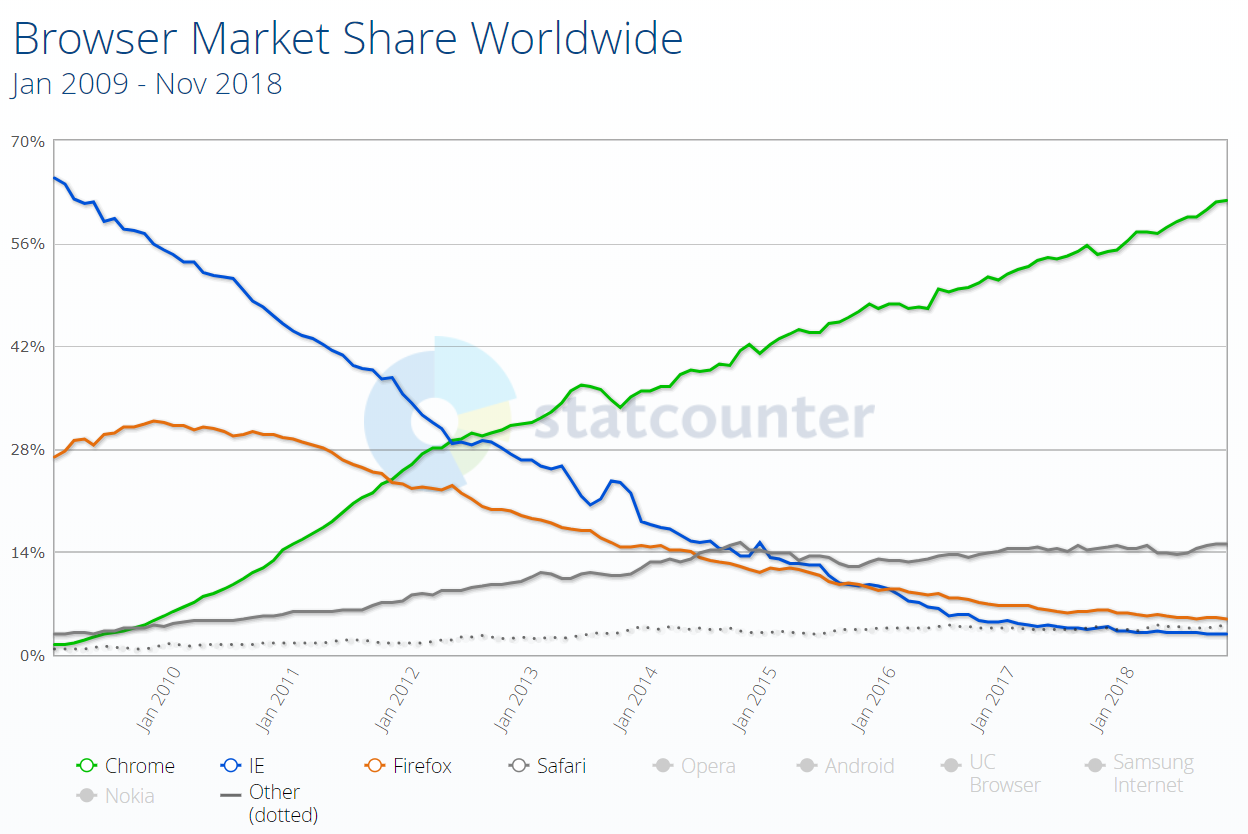 It's incredible to look at the statistics for browser market share over the last decade: Chrome has just eaten the entire market alive with some estimates pinning it at almost 70 percent of global web traffic today. Firefox is at just 4 percent, and Internet Explorer sits at around 2 percent.

Every other browser has receded as a result, except mobile Safari, driven by the rise of the iPhone to around 13 percent of the market. The rift between these browsers is huge and just reflects how effective Google has been at capturing users: it's difficult to escape Chrome these days.

The Microsoft of today, however, is different. The company has clawed its way back from nigh-irrelevance under Ballmer in 2009, and now finds itself vying for most valuable company in the world with Amazon and Apple.

It didn't get here by building a new browser — I haven't even mentioned the fact that Microsoft Edge was a total rewrite from the ground up — but instead by building one of the most sophisticated cloud hosting platforms out there, and doubling down on Office in the cloud. These are billion-dollar businesses, alongside Xbox and Surface, which has helped turn the company around.

Refocusing on that means killing sacred cows, and Edge, the company's new browser, just can't be the focus anymore. Why build a competing rendering engine and expend massive amounts of resources when you can leverage an open-source one and reap the rewards of multiple companies' efforts?

It seems, at long last, that's where we're at.

Microsoft is frustrated with Edge's compatibility issues, and developers are almost entirely ignoring the browser. Swapping the rendering engine underneath would mean much less effort for Microsoft and the perception of a much-improved default browser experience, while maintaining the Edge brand.

Increasing numbers of services online both developed by Google and externally, like design-tool Figma, are only compatible with Chrome because it's simply the fastest to adopt new web standards. Google is adept at quickly merging support for new features, and experimenting with emerging ones, so that hurt the competition too.

That... might be OK, however, given that Chromium is both open-source, and for the first time in years developers will be able to easily target a plethora of devices without custom hacks for each platform to make their tools work. If Edge really does switch to Chromium, it'll mean much more compatibility for those that rely on it.

I know this has been a wall of text, but this battle has mattered repeatedly over the last two decades. Every browser innovation we have today, from tabbed interfaces to super-speedy JavaScript engines, came out of the fight for something better. This chapter coming to a close with a new giant at the helm might be the last big fight, but it also might mean the web begins to stagnate.

Microsoft killing its own browser technology might, ironically, end the browser wars... or potentially start an entirely new one.

Tumblr plans to ban all adult content on December 17
Yes, Tumblr has activated dad mode and has said that it will ban any users posting NSFW content beginning in just two weeks. The platform is home to so many communities that express themselves with nudity and sexual content that this will be devastating, and it appears that this is largely in response to Apple de-listing the company from the App Store just a few weeks back.

Quora discovers a data breach of more than 100 million users
Sigh, yet another horrible data breach. Interestingly enough, Quora appears to be ignoring GDPR and hasn't reported this breach, so we'll see if it will be punished by European lawmakers.

Qualcomm vs Apple trial will start in April 2019

500 million guests affected by Marriott hotel hack
Today in please use a password manager if you're reading this, the Marriott hotel chain was hacked and millions of users had extremely private data stolen.