ARM's plan to take on Intel 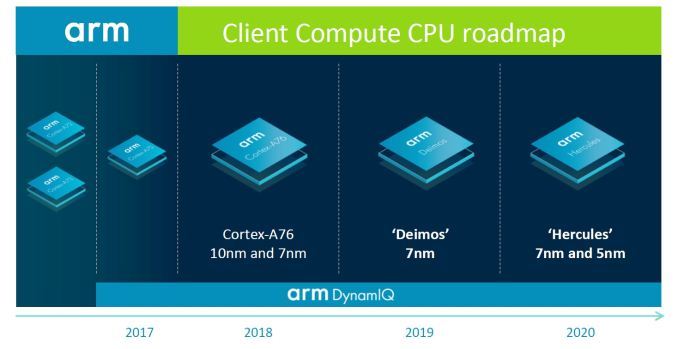 For the better part of thirty years the processor world on desktops, laptops and servers has been dominated by x86-based processors, most of which are built by Intel. It's disturbing to me that I can hear the Intel chime in my head as I write their name, but the company's dominance is an important piece of why your laptop looks the way it does today.

To give a quick bit of background, x86 is simply the type of architecture desktop-class CPUs use, and has been around since the 1970's when the Intel 8086-compatible CPU was introduced.

This matters because the majority of computers sold today are still x86-based, with the sheer majority of them manufactured by Intel (87% of the market), or its far-away competitor, AMD (12% of the market). That market domination lead to Intel getting pretty comfortable with its position, leading to slowing industry innovation and a stagnating road-map as the company began to grapple with technical limitations it came up against.

In the smartphone world, however, the story is the opposite: ARM, a UK-based chipmaker, dominates the industry, shipping more than 100 billion processors for mobile devices to date. Those industries didn't see much overlap until recently, but ARM now wants a piece of Intel's turf.

This week, ARM opened up its entire roadmap to journalists, touting its future release plans for desktop-class computers. That's a huge shot at Intel, and further proof that there may be a pending industry shift to something entirely new, following decades of the same old thing. 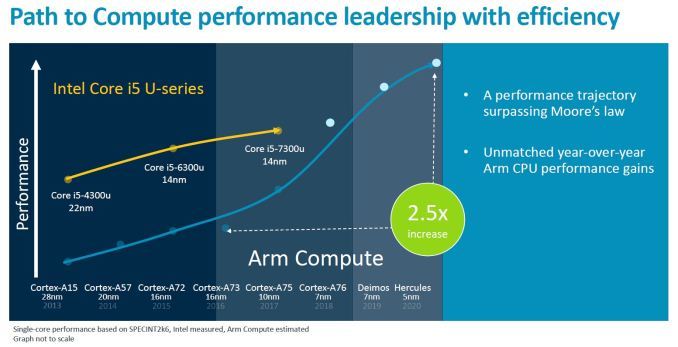 ARM's new roadmap details its CPU plans through 2020, which include a push toward incredibly small, power-efficient processors that are always-connected. The company isn't holding back, even to the point of calling out Intel for how slow it's innovating compared with the last few years.

We've seen hints of this over the last few years. Apple has been rumored repeatedly to have plans to shift to in-house designed ARM-based silicon, and Microsoft has quietly been building Windows 10 to be fully compatible with ARM chips, without intervention from software developers.

What this means is something to get excited about: if ARM begins seriously competing in the desktop space, Intel has a big problem. ARM-based laptops will be thinner, lighter, and run cooler than Intel-based competitors, while having longer battery life and always-on connectivity. Intel has long struggled with heat, fans and battery life, let alone meaningful performance improvements, with only recent versions of its processors beginning to be efficient enough to use in ultra-slim form factors without fans.

What will matter, and remains to be seen, is how well those ARM laptops actually perform against the competition. The defining factor is likely to actually be whether or not the big players introduce entirely new operating systems built for different architectures, rather than just emulating Intel's x86 platform (which will always be slower).

That might be what ends up tipping the scales. Google is quietly working on an entirely new OS called Fuchsia, building from the ground up for exactly this use case, and Microsoft appears to be doing the same with its secretive CoreOS project. It's easy to imagine Apple's Marzipan project, which blurs the lines between mobile and desktop application development, is a precursor to something similar.

The big companies, from Google to Apple, are keenly interested in shedding their reliance on Intel, which drives the roadmap of almost every device in the industry today. ARM's roadmap release this week is a signal in that regard: there's an opportunity to reignite an industry that's been bound to a single company. What software company wouldn't be interested in that?

This is all well into the nerdy weeds by this point, but my point is simple: I believe interesting times are ahead for portable devices again. We all use computers, and they're not going away, but maybe with a little competition we can get new form factors, crazy ideas, and even that Westworld tablet to come into existence.

I certainly wouldn't say no to days-long battery life in a laptop, and if ARM isn't full of hot air, that's likely not that far away.

Nvidia's next-generation GPUs are here, loaded with AI-focused technology
The company might make most of its cash from gaming, but it's increasingly focused on AI use cases. The new RTX 2000-series graphics cards are powerful and much of the improvement comes from machine learning chipsets that now come as standard.

Welcome to checkout-free retail. Don't mind all the cameras.
Amazon was the first to show off cashierless stores, but this WIRED look at another startup in the space is a great example of how creepy those stores can feel.

Trump accuses social networks of censoring conservatives
It's unlikely this will amount to much, but this theory that social media services from Facebook to Twitter are censoring conservative voices is a meme that simply won't go away. All services deny looking at political affiliation, but some politicians (usually those who feel their views aren't getting enough traction) feel that they're being dampened by the algorithm

After the Bitcoin Boom: Hard Lessons for Cryptocurrency Investors