Initial Coin Offerings, or ICO's, are often a great way to raise money if you want to skip over the regulatory framework around investment — but Telegram, a secure messaging app, is doing a sort of middle ground.

Telegram raised $850 million in its first ICO recently, for the TON Project, a virtual currency that promises to well, be virtual money. Now it's raising a second round of funding on the same scheme, before it even goes public, to bring it to over $1.6 billion in total cash raised.

To raise the money, Telegram will eventually do an open ICO, but for now has only opened the scheme to private investors — you need an income of $200K to buy in, for regulatory reasons.

Just like other ICO schemes, Telegram promised it will build a distributed file storage system, a proxy system, decentralized apps and micro-payments into its coin.

These are a lot of complicated problems, but the company promises the blockchain will make it easier — without really much information on how it'll do that:

“There’s been less focus on technical details over time and, for some of these, much more on selling the vision. In the case of the Telegram one there is a lot that is being promised and not a lot of clarity on how that would be delivered.”

The coin is already being flipped in the market for huge profits, even though it doesn't exist yet, because big name investors have gone in on it (notably the 'old guard is missing — no Andreessen Horowitz and friends).

Forgive me for being skeptical on this one, but the alarm bells ring loudly in my head the further down the rabbit hole I go.

If Telegram would say it had great focus for its coin or a proof of concept, and a single goal that would be believable, but it feels like they've thrown a lot of things against the wall in the hope to attract all the people — and raise a bunch of money before the curtain is pulled open.

The Economist, in a piece titled The meaning in the madness of the ICO lays out the issues well: the idea behind an ICO are fundamentally sound, but we're in the phase where everyone's rushing to the goldmine while it's still profitable:

They can provide a source of finance for serious software projects which otherwise have a hard time getting off the ground. [...] ICOs may also give rise to new forms of firm: because founders, employees and users hold coins, everyone has an interest in seeing their network grow, as this will drive up the value of the token.

This may well prove to be true, but for now, it's a stretch at best that Telegram actually needs this money for the purpose it claims. Most of all, building out this thing is a distraction from its core product — something a traditional investor would scald you for.

Telegram's efforts to do a legal offering via the SEC are noble, particularly because the SEC is yet to provide a concrete ruling on these things. They're securities, but not, so the company pushing to appear legal will diffuse lawsuits — for now.

For now, my rule is this: if it looks like a scam, it probably is.

The fight for maps (again)

Autonomous cars present a unique challenge: you need detailed mapping of every street in the world, that is regularly updated, in 3D, so your cars can function correctly. Guess who the only company is that has the data?

Yeah, pretty much just Google. The new holy war in technology is 3D mapping, and technology companies are scared to let the company win again like it did with Google Maps — but the scale needed to map every street corner is staggering.

It’s an expensive ordeal with a payoff that’s years, if not decades, away. “Even if you could drive your own vehicles around and hit every road in the world, how do you update?” asked Dan Galves, a spokesman for Mobileye. “You’d have to send these vehicles around again.”

The new war being waged is finding a scalable way to map all of that ground, fast, and on a regular basis. Currently, you essentially need to go out and drive around in a car gobbed-up with sensors, then catalog everything — not exactly the most efficient way to do it.

Bloomberg has a fantastic report today, which discusses the race to the mapping bottom in detail, and the amount of money being poured into not letting Google be the only contender this time. 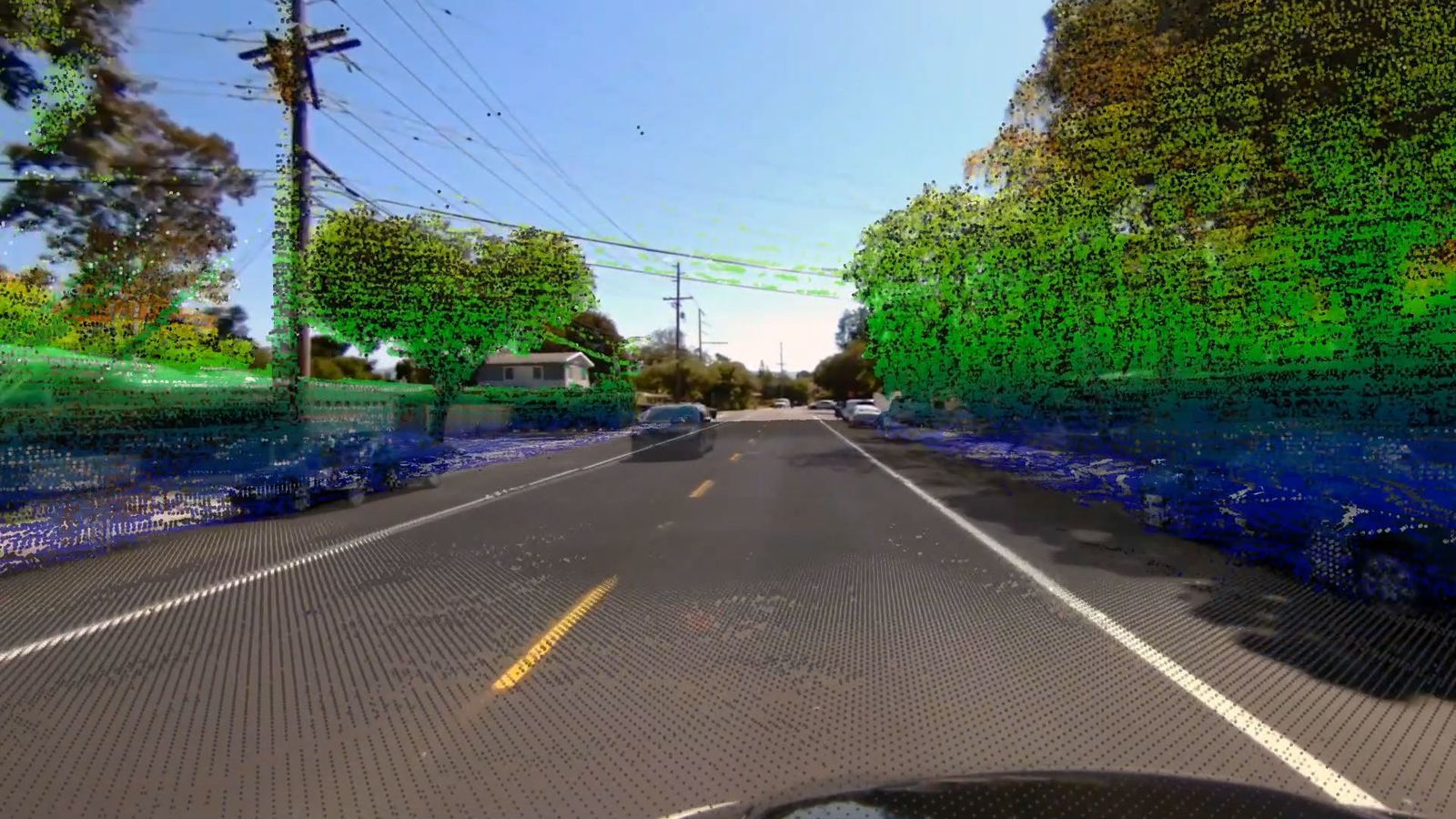 Tesla, out of anyone, seems well poised to do this right: it's equipped many of its cars that are on the road today with sensors, hoovering up the data at scale on the road already — by making normal drivers the data collectors. Uber is poised to do the same with its existing platform..

That, unfortunately, is the chicken and egg scenario car makers are now finding themselves stuck with. The work is tedious, expensive, and only solves a single city at a time.

To make great self-driving maps in 3D, you must be on the road mapping regularly — which scales as you get customers on the road with cars loaded with sensors to act as your new collectors — but to get there, you must expend billions doing it yourself, and just get a single city online at the end of it all.

Self-driving cars are quite literally about to hit the road, in non-test mode, for some regions. As more cars hit the road, more data comes in, and the rift between the winners and losers of the new data war widens.

Second Google diversity lawsuit alleges censorship
Last week, James Damore lost his lawsuit against Google after circulating a memo at the company saying the company's diversity efforts were misguided. This week, Tim Chevalier, an engineer who was fired in 2017, is suing the company for retaliation and wrongful termination — when he called out sexist, and harassing behavior.

The report alleges that Google was quick to punish employees speaking out about harassment issues, but is a peek at the internal politics the company is wrestling with.

Twitter cracks down on automation, sorta
A new set of API rules disallows developers from performing actions at scale from multiple accounts — I'm surprised this wasn't the case already — in an attempt to stem bot accounts. It's fun that Twitter announces this the day after a big report on its inability to ship anything, but I wish they'd just tag all posts that are made from API applications clearly on the site.

Signal gets $50M in funding for its foundation
WhatsApp's co-founder, Brian Acton, has invested $50M in building the Signal foundation, a non-profit with the mission of making secure, private communication ubiquitous. Interesting pivot, after selling to Facebook.