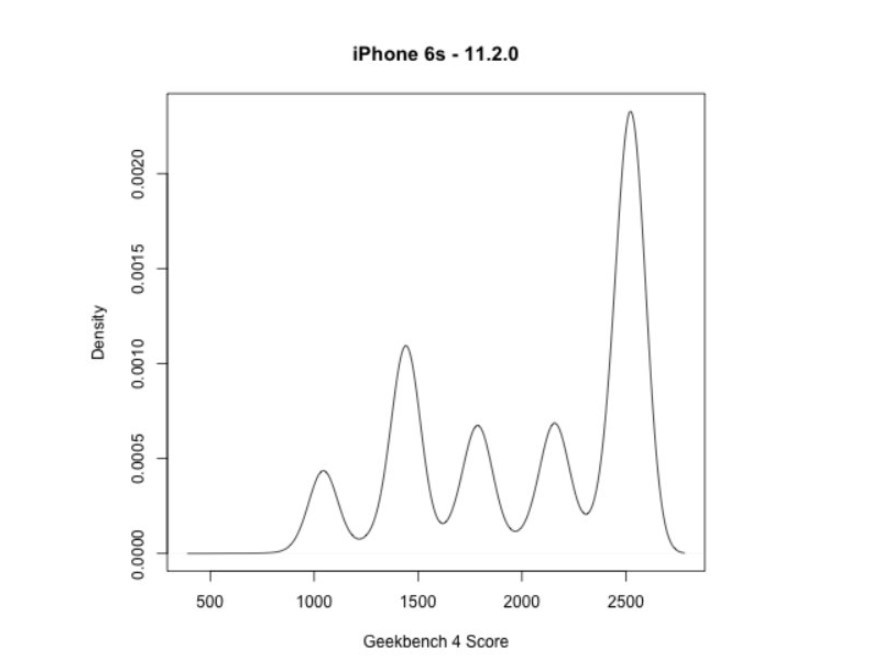 For years people have had theories that Apple quietly slows down older iPhones once a new one is released, and it appears we finally have evidence of that for the first time — but it's not as insidious as people might have assumed.

A post by Geekbench, a popular app for iOS devices that allows users to benchmark their CPU speeds, dug into thousands of user-performed tests and found something quite incredible: Apple throttles down the clock speed of the iPhone's CPU as the battery ages.

It appears something changed starting with iOS 11.1.2, and Apple now looks at the battery age, then throttles it if it's not performing as it used to:

The difference between 10.2.0 and 10.2.1 is too abrupt to be just a function of battery condition. I believe (as do others) that Apple introduced a change to limit performance when battery condition decreases past a certain point.

The reason this post even exists is because a Reddit user found their iPhone to be performing terribly, assuming it was just iOS 11... but after replacing the battery clock speeds increased again. Not only is this an interesting revelation, it's evidence that Apple is willing to degrade the experience of the software without the user's knowledge.

Geekbench offers a theory for why Apple started doing this, pointing out that the iPhone 6s battery was plagued with issues as it aged, and this might have been a way to avoid expanding the iPhone recall that would've inevitably followed:

Many iPhone 6s devices were shutting down unexpectedly, even after the battery replacement program (Which many people weren’t entitled to use). Because degraded batteries last much less and end up with a lower voltage Apple’s solution was to scale down CPU performance, it doesn’t solve anything and is a bad experience… but it’s better than having your device shutdown at 40% when you need it the most.

I've thought about this a bit over the last day or so and believe it to be incredibly user hostile to degrade the user's experience, without notification or consent, in order to "protect" them from an issue they aren't aware of. If that's the case, Apple likely will have a lawsuit on its hands — this reeks of planned obsolescence and actively pushing users to upgrade by making the phone 'feel' old as a byproduct of another issue.

Technically speaking, the way this is managed is smart at the OS layer. Instead of having voltage issues cause instability, the device manages it automatically — but hiding that from the user in the first place suggests a conscious decision to mislead end users entirely.

One argument I've seen consistently is that this is "common knowledge" so why does it even matter?

Planned obsolescence through shady software design hidden from the user reminds me of VW hiding emissions from the government: you should be able to use your devices for years to the specifications advertised until you decide when you want to upgrade. Artificially limiting performance means users paid full price for a device that can't even use the silicon inside to its maximum potential just two years in, and that's unacceptable

So — now we have evidence that Apple intentionally slows down older phones, meaning the easiest way to fix it is just buying a new battery. There's an easy solution to this: actively notify users it's going on in the background so they're able to make a choice about it instead.

Agree? Disagree? There's a lively thread over on Discuss right now about this one.

Default ad blocking in Chrome arrives February 15
That's right, Google plans to stop showing ads by default from 2018 under new guidelines that require advertising to be less intrusive. This is going to be a gamechanger and devastating for the industry — I can't wait to win the web back again... autoplay video is exhausting.

Facebook will notify you if someone uploads a photo of you
I'd always wondered why this wasn't already a thing, and it's here: Facebook will now notify you if a friend (or someone random) uploads a photo of your face in it — it's a little disconcerting, but the value of this is being able to protect your identity on the service will be invaluable.

Google Maps's moat
Here's a fantastic long read that compares Apple Maps and Google Maps outside cities to show just how far ahead Google's map data is. It's quite striking.