Tumblr is one of those websites that still gives me the 'old web' feeling that's so rare online these days—and it's something of a miracle that it's still even around, given Yahoo, then Verizon, essentially drove it into the ground.

Verizon, looking to rid itself of a liability, has been actively pursuing anyone that's interested in buying Tumblr, even though it's really unclear what it's worth at this point. Tumblr was acquired by Yahoo for $1.1 billion in 2013, but it struggled to grow the platform and eventually wrote down the value by $230 million.

What's strange is, as Alex wrote on Twitter, growth reached its peak shortly after the Yahoo acquisition and went off a cliff a year later in 2014 as users looked to services like Facebook and Instagram for something different. 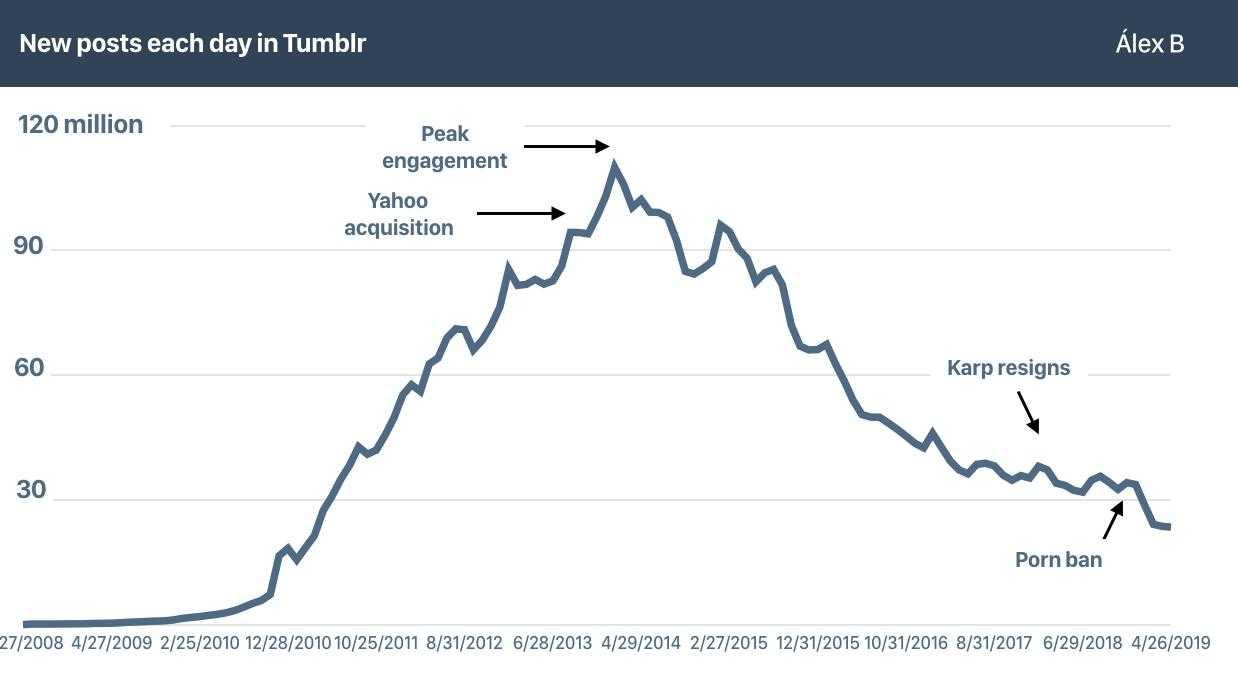 A big question faces Verizon: who would actually want Tumblr? When Twitter was near the brink of being acquired, it found eager suitors in Salesforce and Microsoft, but eventually wound up deciding it was better not to sell. Tumblr is a more difficult fit; it's a platform that's dying, monetized only through advertising.

The old web is dying, and Tumblr is one of the last few places that actually felt like it had survived over the years. Cates Holderness wrote in 2018 that the "internet is getting small and boring" and she's right, because the corporate overlords just can't risk letting it run riot anymore.

Under intense criticism for years at this point over Facebook's decision to allow far-right commentators like Alex Jones and Milo Yiannopoulos on its platform, the company has finally come down on a side: they're all being banned.

The news arrived suddenly overnight and was everywhere all at once—because Facebook took the opportunity to drum up as much positive press as it could and provided the news under 'embargo' to journalists, a move that felt slimy at best.

Essentially, Facebook has decided it actually has a stance, banning Louis Farrakhan, Alex Jones, Paul Nehlen, Milo Yiannopoulos, Paul Joseph Watson, Laura Loomer, and Infowars in one move, and actually going as far as now imposing temporary bans to any user of the service that posts links to their content too often.

In its defense, the company said that "we’ve always banned individuals or organizations that promote or engage in violence and hate, regardless of ideology," which is laughable at best because it definitely didn't want to do anything at all for a long time—refusing to take responsibility for their actions.

Evidence has shown that 'de-platforming' people that incite hate on platforms improves overall health for the entire user base, making this an important step forward in owning the problem at the social network.

As The Verge editor, Casey Newton, points out, Facebook is beginning to identify that the problem is both the influencers themselves and their network:

Facebook has acknowledged that right-wing extremism is a global network, in which the most prominent influencers regularly collaborate and promote each other. By banning the extremists because they collaborated, Facebook both begins to root out its hate-speech network and discourage others from joining in.

The next step for Facebook is actually being far more proactive, and enforcing these rules consistently, rather as a one-time PR play.

Coming up in the next few weeks are all the tech showcases from the big three. I'll remind you on the day, of course, but you can always just read the briefing to see what's announced! Here's what's on the immediate horizon:

Stripe backs remote work on a global scale
Computers promised to unchain us from offices, but most companies still require people to sit in the same room in order to receive a salary. Some companies like Zapier have gone all-in on being remote, however few large organizations have been willing to—even Slack bans remote work. Stripe, however, has just declared that it's all-in on global remote work, even if it'll take time to get there.

Good read: Behind the fiasco of Star Citizen, a game that's raised $300M in cash from crowdfunding and still isn't done