After years of insisting that Facebook should connect everyone, and that privacy is not all that important, Mark Zuckerberg has had a sudden change of heart. In what can only be called a manifesto, Zuckerberg laid out his vision for the future of the platform:

I believe the future of communication will increasingly shift to private, encrypted services where people can be confident what they say to each other stays secure and their messages and content won't stick around forever. This is the future I hope we will help bring about.

This is... a surprising change of heart from a CEO who didn't really talk about this at all in the past. He goes on to describe how Facebook will go about building this 'private' platform with content that won't last forever on a server somewhere—but can he be believed?

Breaking the post down and reading between the lines, I see this as an announcement of a bunch of stuff all over the show, and I can't resist just breaking out everything I thought was notable here. Shall we dig in?

Facebook, the product, is now in legacy mode. This post, at face value, is an announcement that Zuckerberg no longer truly believes that Facebook's Newsfeed product can last the test of time, and he's pivoting the company away from it.

The Newsfeed is the cornerstone of Facebook's flagship products, but it's clearly not working at scale. It might stick around in some form to aggregate posts that are public, but it won't be the centrepiece in the future.

This isn't even really hidden at all in his piece: if you work on this at Facebook, it's clearly not the favorite product anymore, and will likely get less attention as time goes on.

Privacy and encryption are popular with users, but are being used as a way to make its platform merging more appealing to regulators. When rumors started flying that Zuckerberg wanted to merge the backend of WhatsApp, Instagram and Messenger, regulators noticed.

Germany moved in just a matter of days, ordering the company to cease combining user data without consent, and issuing it with a warning about doing so in the future. Other European companies expressed hesitation about the plan, which had not even been announced yet.

This announcement that the development of Facebook moving forward is going to be privacy-centric, and that the merging will continue with that in mind, is designed for one reason: to make regulators feel like it's better than what exists today.

But, I'm deeply skeptical about all of this and the meaning of Zuckerberg's actual words. Privacy and encryption are really broad topics, and "encryption" is fairly easy to achieve if you hold the keys, can decrypt user content on demand and mine it for information.

I take this with a grain of salt, and a reactionary measure: Zuckerberg loves big grand declarations like this, but following through is not his strong suit. If anything, Facebook is doing this because it sees the writing on the wall, not because it absolutely believes in it.

Then I read the PR tour Zuckerberg went on overnight, in particular this interview with WIRED magazine, where Zuckerberg dials back his bold claims fairly quickly:

Yes, yes. I mean, Facebook and Instagram and the digital equivalent of the town square will always be important. I actually think that they will continue to grow in importance.

Good hedging, right there, but that leaves us in a confusing state: will Facebook eventually cut deadweight and move away from the feed, or will it remain stuck on at the side, given how much revenue it generates? Who knows, because I'm not sure Zuckerberg is even confident yet.

Merging messaging platforms benefits Facebook more than it does users. I don't think Zuckerberg even tried to thinly veil the goal of merging those platforms into one: building the world's biggest messaging network before it fragments too much.

The post repeatedly talks about 'interoperability' without once mentioning making any of these products interoperable outside of Facebook's walled garden... with the exception of SMS?

Facebook clearly sees huge benefits in merging tools and allowing people to message from WhatsApp to Instagram... but I don't know if users really want that as much as they assume yet.

The nice part about Instagram is that it isn't integrated into Facebook's dizzying mess of other products. The same goes for WhatsApp. Merging them would muddy the water, and I think make users question why they use them in the first place.

It does, however, benefit Facebook: they can see user's activity end-to-end in a single backend, track those 'private' conversations regardless of where they happen, and use that data for whatever purpose. It'll feel private, but gives the company greater oversight of how you actually interact with its surfaces.

What this looks like is really difficult to imagine, but likely comes down to extrapolating 'Facebook' the identity layer away, and making one big thunking database with all your information in it for each app to independently talk to. Essentially, each app is nothing more than a brand at that point: 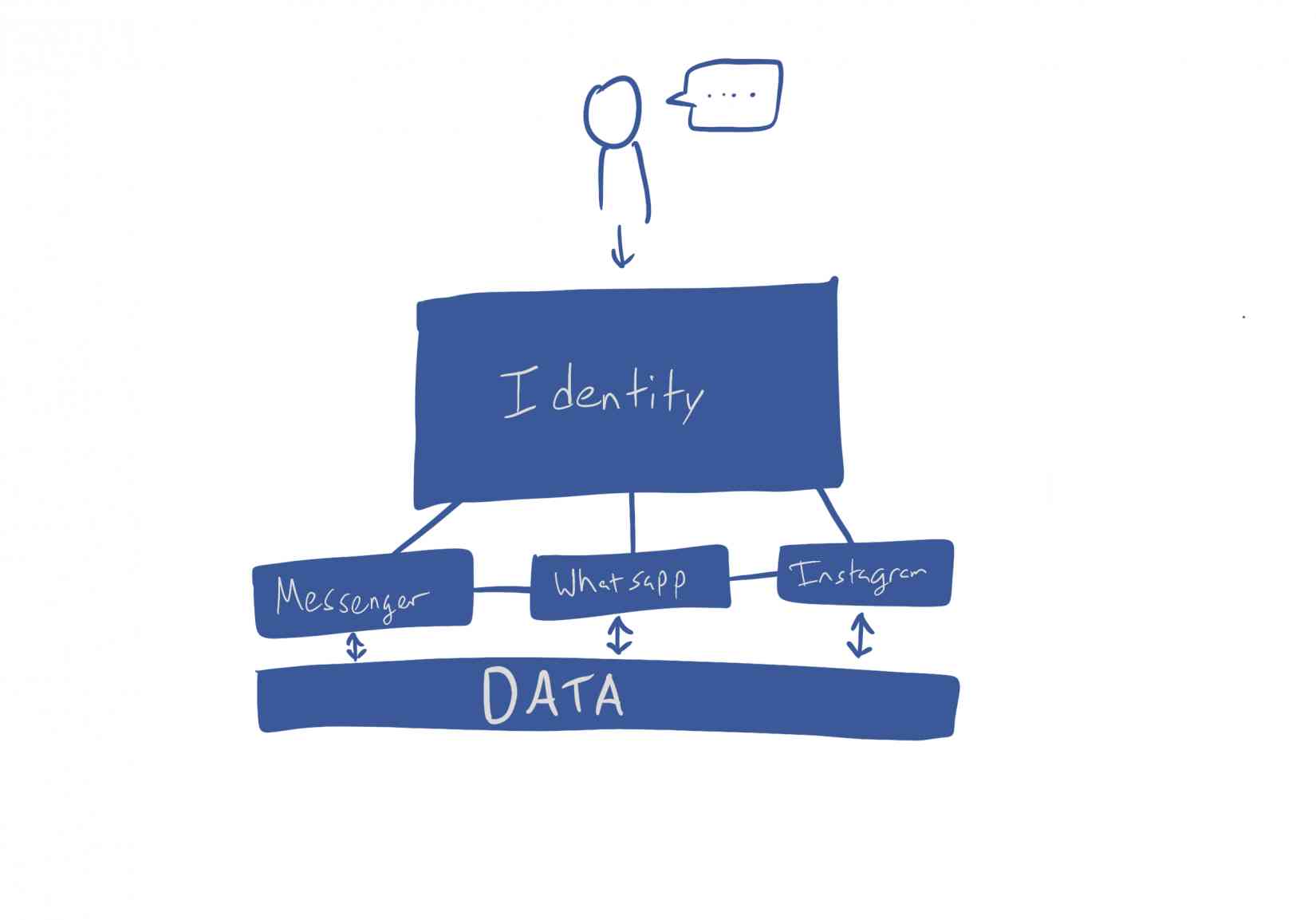 The new 'private' Facebook has no business model. The pivot to encrypted data and privacy-focused products sounds really great, but how does Facebook make money in this new world? Its current product is predicated on knowing every last thing about you then using that to serve hyper-targeted advertising.

How do you do that in a private-by-default platform? Zuckerberg has no idea, and no absolute plan in place to solve this yet... except there's that commerce thing.

Facebook is heavily investing in building a cryptocurrency and other message-based commerce tools, which, with this new goal in mind, are a convenient overlap with a pivot away from its primary monetization tools today.

Ephemerality is the hot new thing, but it's not clear what that means. One of the declarations in here? That Facebook now believes your posts should be ephemeral, deleting themselves after a certain amount of time by default.

As to what this means is unclear. When users hear 'ephemeral' they assume that means deleted, but in most cases, it actually means that the company just dissociates it from your account, keeping it around in the database for later.

Still, Zuckerberg does say that he thinks that it "makes sense" to limit the amount of time the company stores metadata and messages, because it doesn't need to keep it forever which is actually kind of refreshing.

Fake news, misinformation and other problems become more difficult to uncover. The primary problem Facebook faces today is that misinformation won't really ever go away? For as long as Newsfeed exists, it will be exploited by bad actors, and the media will be able to spot it.

If things go private by default, that changes fairly dramatically: how do you track the dissemination of fake news when it's happening in small groups of people? Well, WhatsApp is already grappling with this in Brazil, India and other countries, but it's difficult to track.

It might have the benefit of helping to stem some of the 'viral outbreak' problems caused by public feeds, but will severely limit the ability to track it or understand public sentiment. It does, however, make it easier for Facebook to significantly lower its investment the moderation of content.

Zuckerberg might be telling the truth. It's just hard to tell if Facebook should actually be the one delivering this future—if it deserves to exist forever—or if it will even be able to do so.

It's a post that's exciting for many reasons, but it's difficult to not remain skeptical: Zuckerberg loves to proclaim things like this, such as the time the company pivoted to video, but the reality always turns out a bit different.

Making the changes necessary within Facebook, in terms of teams, motivations, goals, and just human resources are going to be a massive challenge. Pivoting to private, from running the world's largest ad network, is a herculean feat.

Zuckerberg thinks they've got what it takes to turn that bus around, while still hurtling down the ad-funded highway. I'm excited to see if it budges at all in the other direction, or if it keeps on heading the way it already is.

Google Chrome suffered a zero-day exploit last week, found in the wild, so make sure to check for updates

Good read: the prototype iPhones hackers use to break into Apple's most secret code