Apple's big services event: a subscription for everything

If there's anything to take away from Apple's March event yesterday, it's that the company wants investors to know that there's nothing to worry about: it's got plenty of new monetization strategies coming down the pipe, and consumers will clamber to pay for them.

But, what's perhaps most surprising is that there were hundreds of questions I had going into this event, and by the end very few were answered in earnest. This piece will be long as I try to break down what we learned, and how each part was positioned.

Let's recap the biggest announcements and what matters: 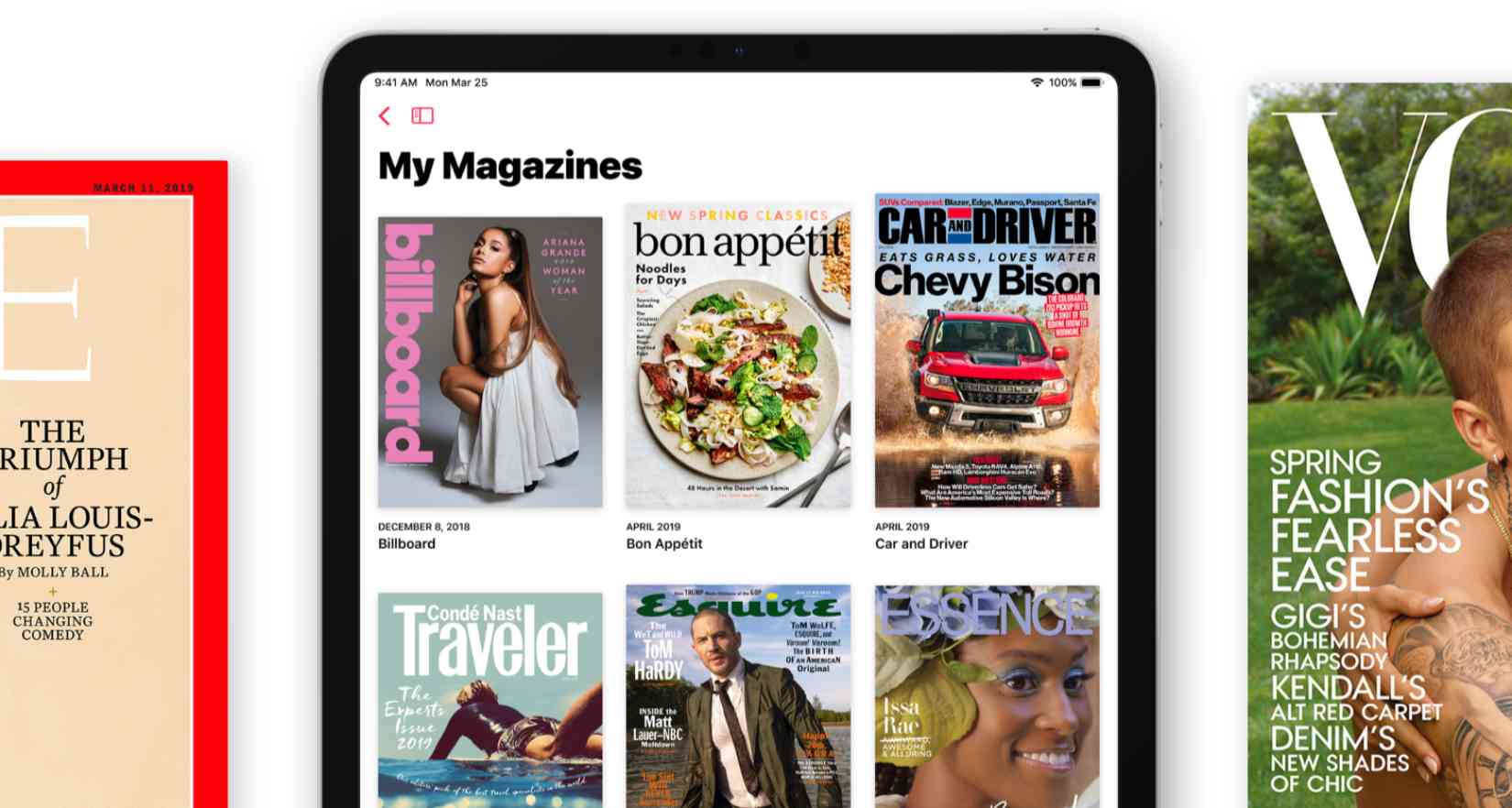 A new $10 per month subscription that allows 'unlimited' access to ~300 full magazines, which lives inside the Apple News app under a new tab, and is already available today in iOS 12.2 if the News app is supported in your region.

This service includes the Wall Street Journal, National Geographic and others, but the definition of 'unlimited' appears to be unresolved, with the WSJ repeatedly saying it's "some" content and Apple representatives saying it's "all" content. It's really not clear, still, what is included.

Apple reportedly takes a 50 percent cut from news revenue on this service, so it appears the relationship is already going very well! I'm probably not the target demographic for this, but it doesn't seem particularly sustainable for the news organizations involved at this price point.

I'm not really sure I have much of a take here other than that the parallels to Facebook's attempts at wooing the news, along with Snap and others, just a few years ago, are painfully obvious. The Wall Street Journal loudly touted that it would hire a bunch of journalists for this—but two years later when Snap pivoted away from news, they were all very painfully laid off. Betting on platforms is a bad idea! 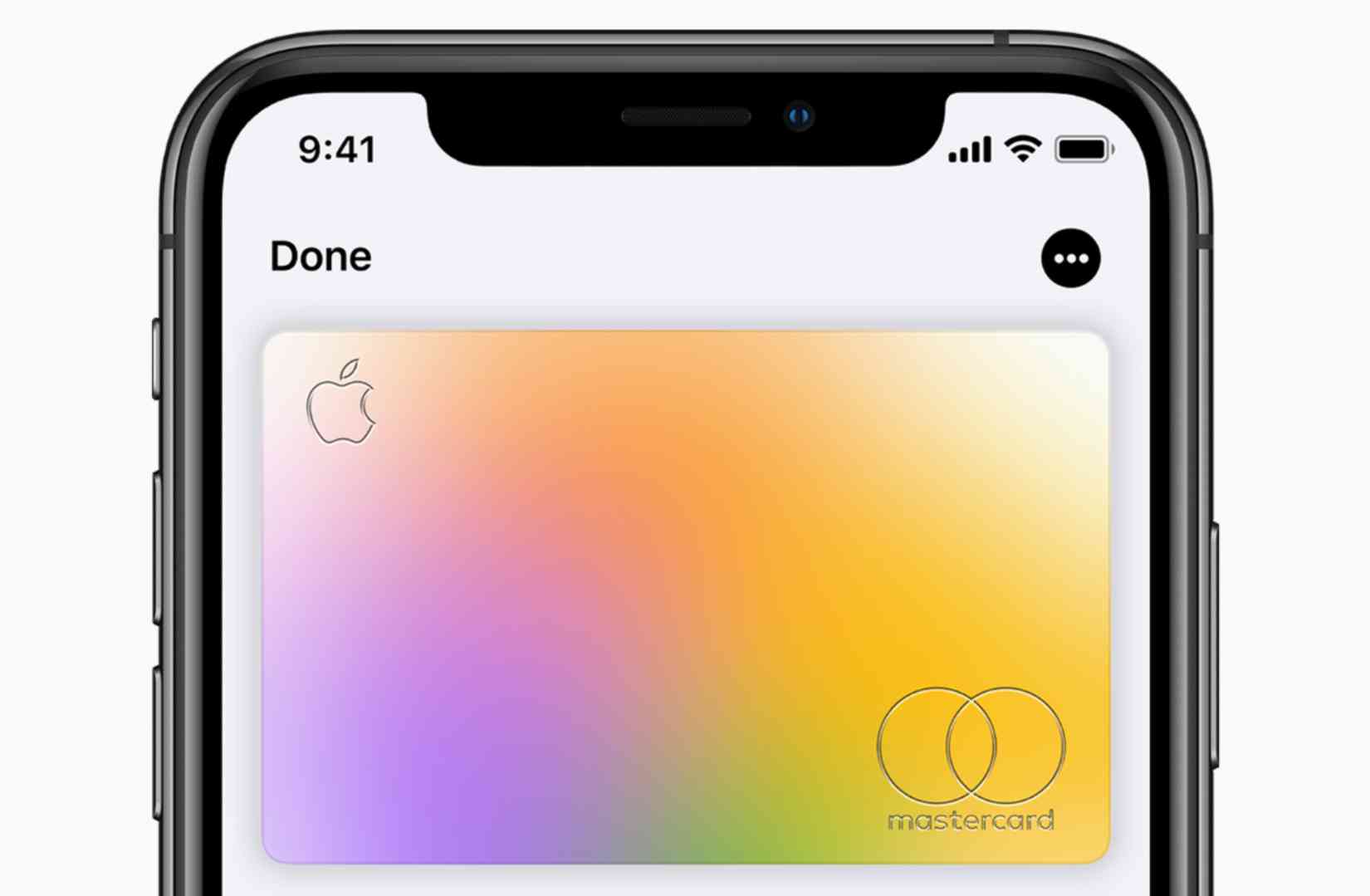 Frustrated with how long it's taking for Apple Pay to reach every bank in the US, Apple's jumping in with its first self-branded credit card. It's primarily designed as a virtual credit card, which lives in the Wallet entirely—everything from repayments to expense tracking is there for this card.

This is a big move for the US market, where Apple will actually debut a physical card to go alongside the virtual one so transactions that aren't contactless show up there too, albeit with a bit more security. This is an end-run around the slow contactless adoption that has plagued Apple Pay there, and essentially forces the industry's hand.

That's arguably the innovation here: Apple's credit card is likely the first that doesn't collect user purchase patterns to be sold in aggregate to marketers, because it partnered with a new entrant—Goldman Sachs—and it offers a way to instantly get Apple Pay without switching providers or banks entirely.

Other than the privacy-focused parts of this card, as a European-based writer I found the card pretty unexciting—everything that was touted, from low fees to the rotating CVV for security, is something I've had from an array of fintech companies for years, with many more features to boot.

I doubt this card will ever make it beyond the US for many reasons, which is perfectly fine, but a reminder of where Apple's attention is focused. Apple invented Monzo—but specifically for America—because nobody else could pull it off at scale. 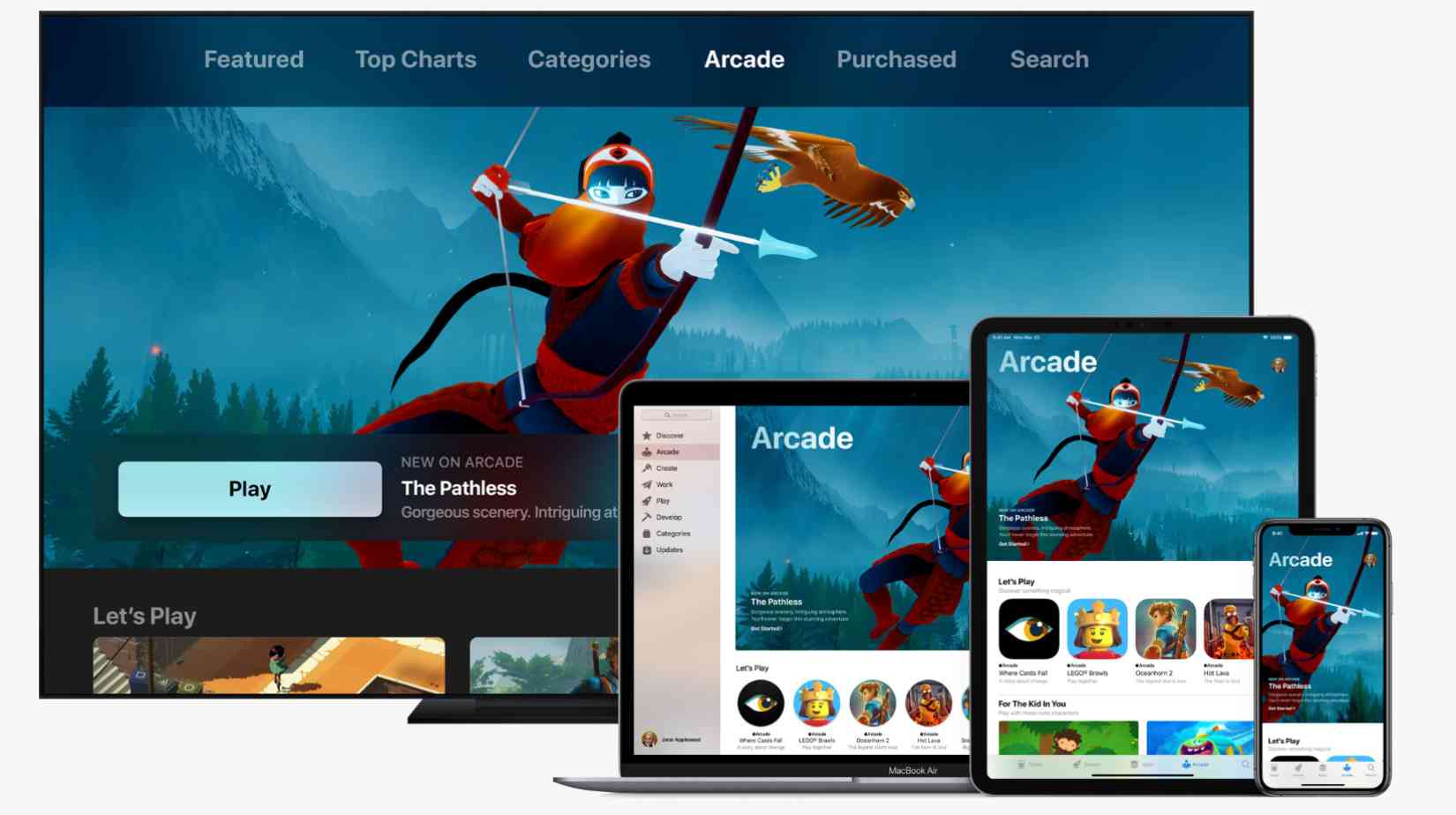 An unexpected surprise from the event is a game subscription for the App Store, in which Apple will both back the development of original games and host exclusive content not available any other way.

In what felt like a strange jab at Google's Stadia game streaming service (which we don't know all that much about either, notably), Apple heavily touted that games "work offline" and won't feature advertising—even though these are fairly separate segments.

Essentially how this works is you'll pay a monthly fee—which was not announced—and get unlimited access to 100 or so games across iOS and tvOS. Strangely enough, this service won't launch until the Fall, which makes me wonder: is Apple delaying this in order to ship it alongside cross-platform support for macOS?

Given that we're expecting Marzipan to arrive at WWDC—Apple's new technology for building iOS apps that work on macOS—the Fall release timeline would make a bunch of sense, and make arcade much more appealing for both developers and consumers.

It's difficult to draw conclusions on this given we don't really know much about anything else, but Apple pushing into offline so hard when everyone from Microsoft to Nvidia and Google are pushing for moving the entire stack into the cloud, is interesting. This is Apple's strength, and perhaps its only real unique play in the space as well.

This subscription will be a big hit with parents, I imagine, who are already faced with kids hounding them to buy individual games endlessly. Paying a flat fee to access a bunch of stuff is genius, and will rake in revenue for sure—but it's a lot more work for Apple to curate that library. 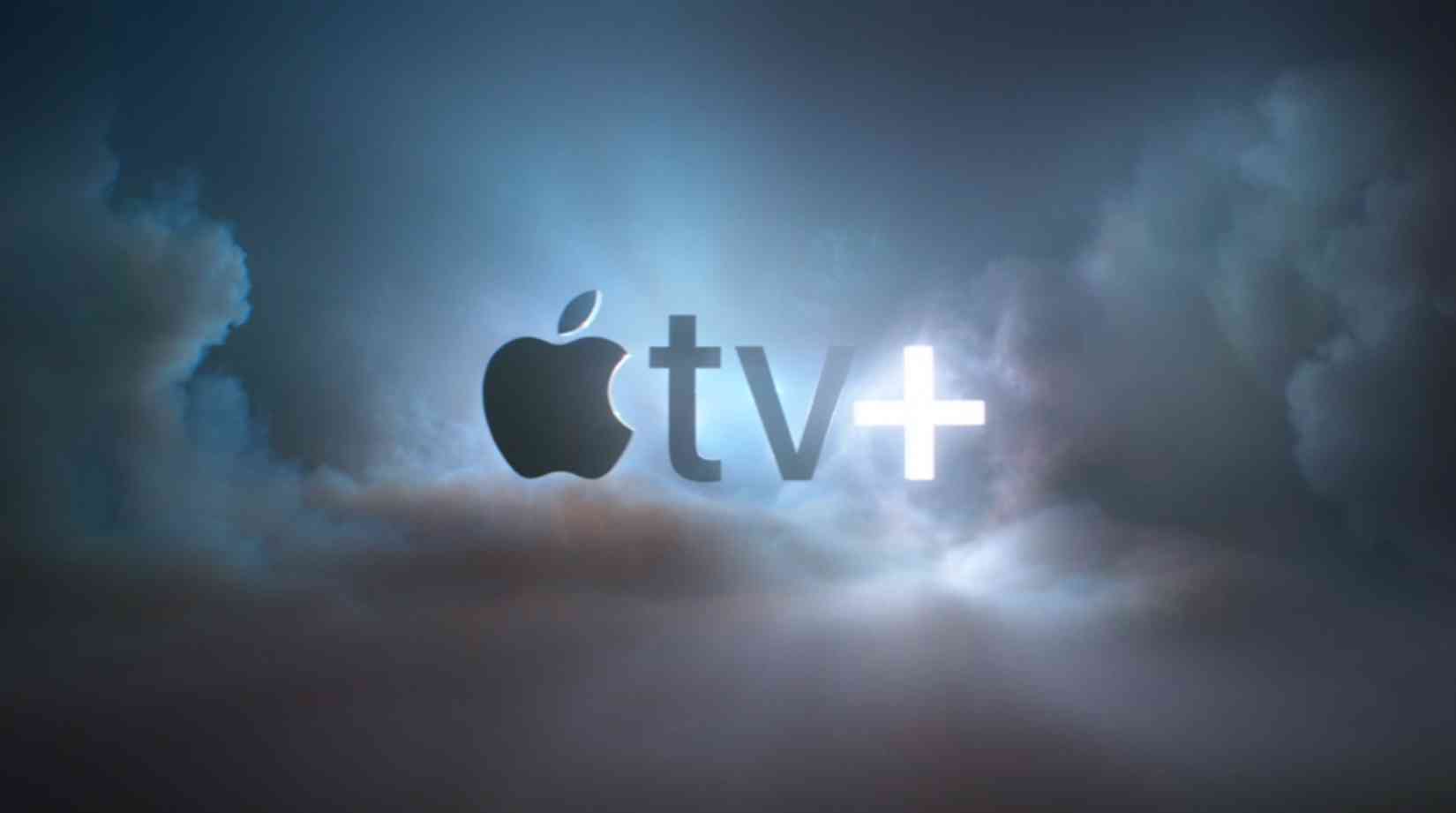 This is what we were waiting for out of the event but it also happened to be the most confounding part of the unveiling, where I was left wondering what was actually happening.

The TV news was broken into three parts: a new Apple TV app, which allows streaming services to expose content/subscriptions in one place, a partnership with cable news channels that will show up in the same place, and a dedicated streaming service, Apple TV+.

The new Apple TV app is about as boring as the old one, except you're able to pay for channels individually—but this is already a feature in services like YouTube TV, Hulu and even Amazon Prime Video, so it's a struggle to understand what's innovative here at all outside of Apple getting a cut.

Apple TV+ is the company's first big play into streaming, with original content as far as the eye can see, and like Netflix, will require a monthly subscription fee. Unfortunately, it might have been presented in the least exciting way ever attempted in keynote format: A-list celebrities were trotted out for 45 minutes straight, who then slowly described the TV shows they want to create using only words, without trailers, visuals or anything else to capture the imagination.

I am surprised how uninspiring Apple was able to make content it's spent hundreds of millions acquiring—with Opera's surprise wrap-up being the exception at the end—with very little to show for all of the fanfare.

Apple didn't unveil TV+ pricing, specific availability, or even a launch date at the end.

All we know is that only Apple content will be available in this paid service—which is a confounding decision on its own despite the lineup of celebrities. Other details are about as vague as well: TV+ will launch in "100 countries," sometime in the fall, living within the refreshed Apple TV app. 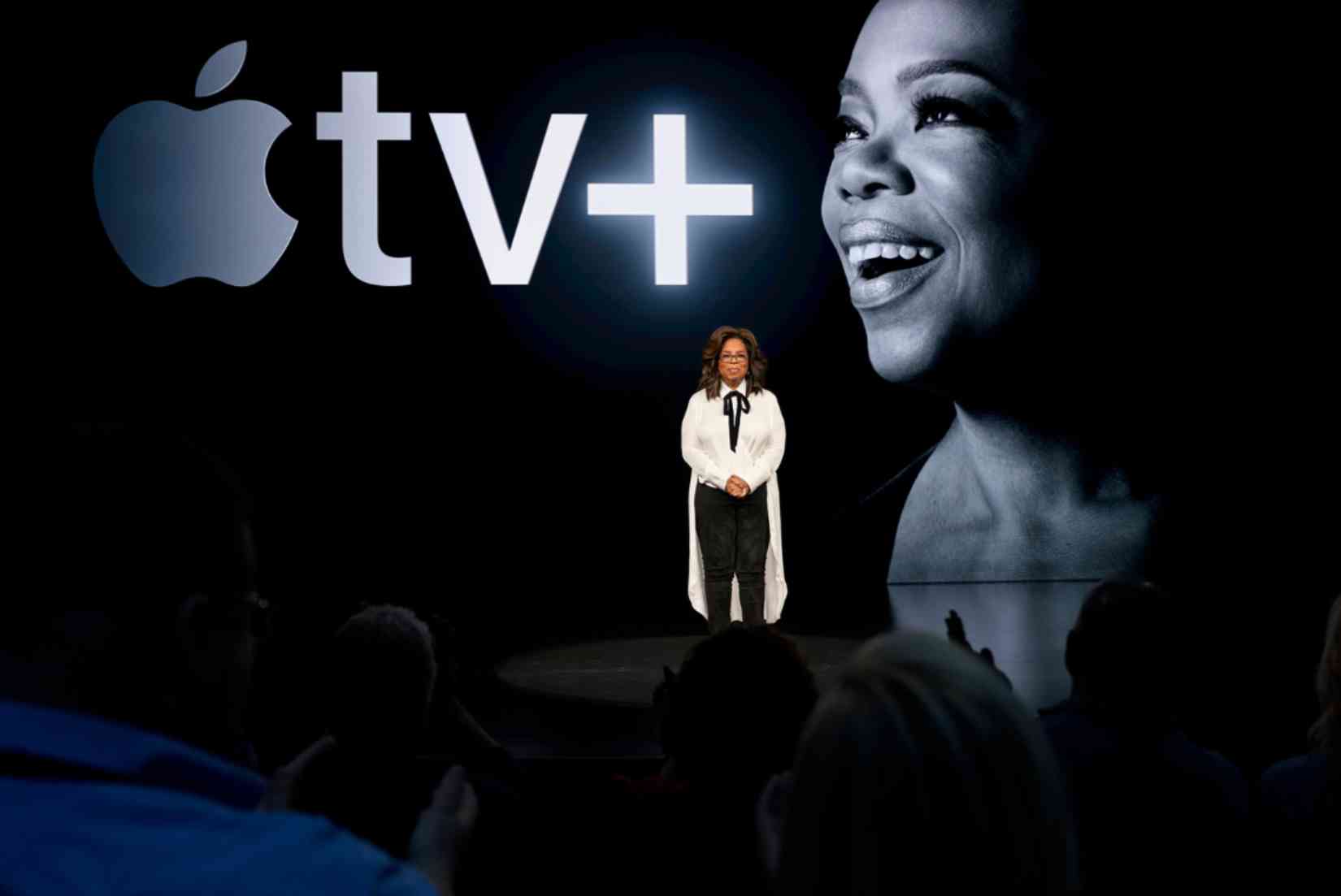 We still don't know specifics of what actual TVs it'll come to outside of brand names, what devices it'll launch on (Android, anyone?), or even how Apple will justify the cost of a subscription when it's competing with Netflix, which offers original content and that of others for a single price. Essentially, we learned the name and nothing much else.

Going into the TV part of the segment I was expecting to get my wallet out, but ended up wondering what this thing even really is—which was genuinely surprising. Apple is the master of announcing new hardware, then magically finishing with "it's already available in stores" and couldn't ship this with any type of certainty attached.

How it stumbled when trying to describe a service, with such a impressive list of celebrities, then failed to even deliver on much in the way of further information was surprising. But, hey, when the content actually arrives it might be a different story.

Phew, made it this far? Good work. This event was unique because I'm not sure it was entirely designed for you or me; like the Stadia event, this unveiling was designed to both stoke investor confidence and attract creators from across each segment.

Assuming the average user might pay for 2-3 of these services, that's a pretty astounding amount of recurring revenue out of a single event! All Apple needs is 200,000 people to pay this much and it's got a guaranteed billion-dollar business already—given there are some billion iPhones out there today, that's not infeasible within a few months of these hitting the market.

If anything, the announcement of so many subscription services in a single event set off red flags for me about something else: it feels like we're hurtling toward subscription fatigue. For every company on the planet, recurring revenue is much more appealing than a one-time purchase, and it's possible to subscribe to everything from toilet paper to games at this point.

How many subscription services is a person really capable of paying for before they get burnt out on paying for things forever? There are already reports that many consumers are feeling frustrated by subscriptions, and Apple is essentially betting the house on adding multiple new ones to people's lives.

Peak subscriptions means that like your attention span, every company ever is now in direct competition with one another for your dollars. Apple now competes with Discord or even Quip for your monthly dollars, and when that peak comes it's likely that consumers will simply cancel one subscription to add another.

It's very clear that the Apple of the future looks very different, and that the entire business model is shifting before our eyes. What's going to be fascinating is whether it unravels, or successfully captures the entire market along the way.

Uber acquired Careem, its rival in the Middle East, for a whopping $3.1 billion
Most companies shy away from spending big money on acquisitions when they're going to IPO. At Uber, that's not a problem.

Good read: The long, complicated and frustrating history of Medium