Apple: we aren’t a monopoly, we swear 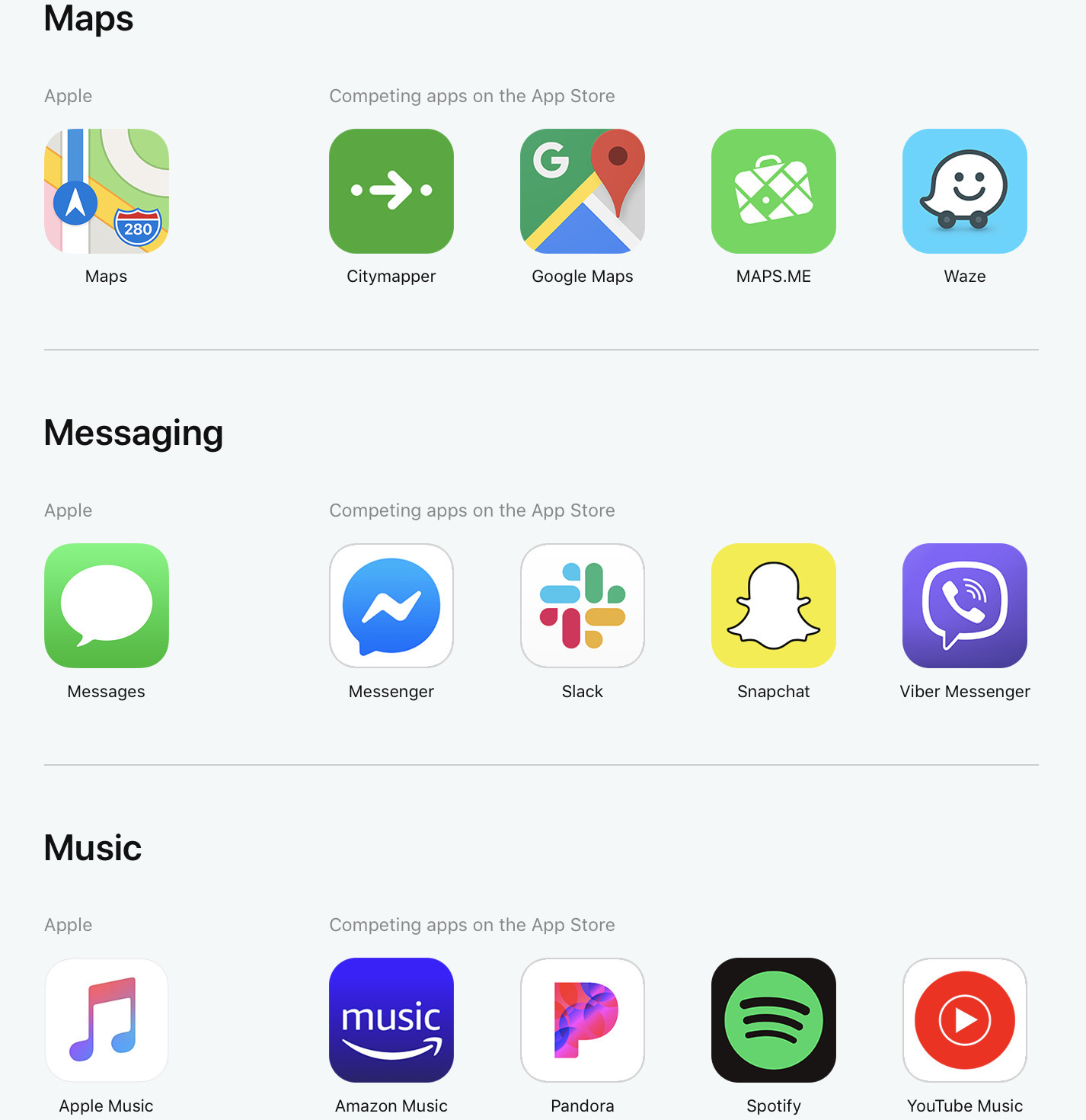 Right now, Apple faces two enormous investigations from its largest markets: a formal EU investigation into its App Store tactics on Spotify’s request, and an antitrust investigation back home in the U.S.

To defend itself, the company is appealing to the public with a new site that attempts to defend the App Store: actually, it’s a $120 billion platform that pays people who make apps, and makes other business models possible.

It’s the most transparency Apple has ever had about the App Store, with details on its scale: 100,000 apps are approved every week, but that’s just sixty percent of all submissions, with the remainder rejected over “minor bugs, followed by privacy concerns.”

The page gets bizarre at the end, in a section that’s designed to show all of the choice users have for alternatives to the built-in apps.

App by app, the company lists out alternatives, but omits many of the realities: sure, you can choose a different browser from Safari, but you can’t change the default browser, and whatever else you used is arbitrarily forced to use the Safari rendering engine under the hood.

Sure, choosing a default isn’t a deal-breaker, because users have clearly bothered to go around it in the millions. But, Apple instead has inadvertently highlighted the power of defaults: pointing to the success of other apps while omitting the likeliness a user is to just user whatever’s pre-loaded was the entire point of Spotify’s lawsuit.

That’s where these antitrust lawsuits are likely to focus, too: Spotify, unlike Apple Music, must convince users to download its app before it can even hope to maybe sign them up (and even then, the rules mean Spotify can’t tell users that they must first pay on a computer). Apple, however, just puts the icon on the home screen and boom, it’s got a few million users.

The site is an interesting browse, largely because it actually spotlights the App Store’s incredible success so far. It’s helped developers make millions, and the amount users spend on iOS compared with Android is a powerful reason developers choose it in the first place.

But, the irony is, that the site shines that spotlight on how hard it is to compete if Apple chooses to play in the same space as you.

Sorry, you can’t drink here. Our facial recognition says you’re banned.
Worried about China? The private companies doing at-scale facial recognition scare me more, like this story about a technology called PatronScan that helps bar owners throw out customers who end up on a shared blacklist.

The U.S wants T-Mobile to make a new rival carrier if it’s allowed to merge with Sprint
I love the idea that T-Mobile must spawn a well-funded spin-off to compete with its hulking, merged self... it’s just weird enough that it might actually work.

E-sports is huge. So developers are building venues to match.
Here come the stadiums for watching e-sports, with multiple opening across the U.S. in 2019, to accommodate hundreds of millions of fans watching the digital equivalent of a popular soccer game.

Google’s new rules for Chrome ad blockers exclude the enterprise, but will change how ad blocking fundamentally works in the name of privacy

Good read: Metadata is the big little problem plaguing the music industry
If, like me, you spent hours curating your iTunes library in the early 2000’s to look beautiful, with all the right information attached to albums, this might sound familiar. Except... it’s a nightmare.