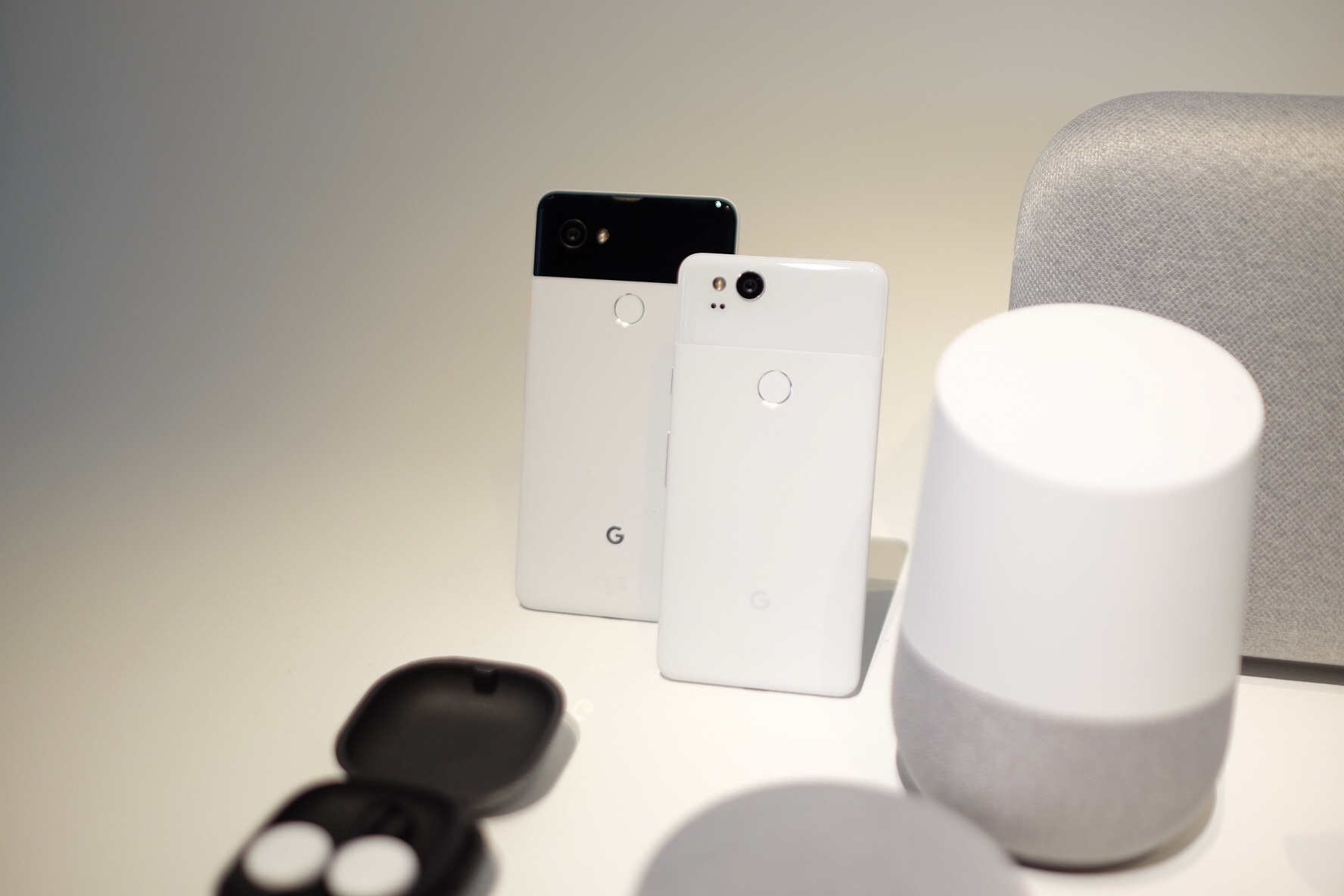 Here in San Francisco this morning I was lucky enough to get a spot at Google's annual hardware event so I attended in the flesh for once. I went in with fairly low expectations, maybe another phone bump or two, and came away really believing that Google has what it takes to actually play in the smartphone space over the next few years.

It wasn't so much a keynote event as an all-out onslaught of new hardware: two phones (Pixel 2 and Pixel 2 XL), two Google Homes (Mini and Max), a pair of wireless headphones (Pixel Buds) and a fun little camera experiment called Clip. The clear takeaway, after two hours of surprises, is that hardware is not a hobby for Google anymore.

Take the Pixel, probably the product people are most interested in from Google: even the original Pixel which hit the market this time last year is reviewed to have a better camera than the 8 (still!) and Google's doubled down on that even further this year. By getting cozy with HTC and building deep integrations you're starting to see interesting trends emerge: software is starting to eat phone hardware.

Here's an example of what I mean: on paper, the Pixel isn't actually the most interesting hardware out there. It's run of the mill, but with Google's software the company's pushing machine learning to its limits to produce photos that are visually better than what the iPhone is able to do with half the sensor array.

Both the small and large Pixel are able to do the 'portrait mode' blur effects with just a single camera on the front, using machine learning to differentiate where to put the delicious bokeh and producing a pretty impressive result.

Purists might argue it isn't real and that hardware is absolutely the best way, but for the end user does it matter whether there's a whole camera array or if it magically happens in the software? Absolutely not, and Google's shown that it can produce something great without expensive camera arrays.

What's even more appealing to me, however, is how Google's industrial design language went from zero to a hundred in the space of a year. In 2016, the company started playing with fabrics, textured plastics, glass and other elements to create phone hardware and this year it's all in: the new lineup uses playful bright colors, textures and other elements to create a product that doesn't look like anything else out there.

Apple's 2017 iPhones are perhaps the peak of perfection, and a product of constant iteration and sweating the details, so what you're starting to see is predictability. The iPhone 8 is the precise result of that iteration, more of the same, and the iPhone X is a result of Apple trying to innovate within those boundaries.

I've given my thoughts about the X before, but Apple's vacuum of pushing the boundaries in 2017 has created a window for Google to get weird with hardware design and try steal some of that market share while the iPhone lineup starts becoming confusing. By working with HTC, acquiring a large part of its business and doubling down internally, we're starting to see those efforts bear fruit.

Both Pixel and Pixel XL have the same feature set across sizes, and there's a number of interesting things Google is able to differentiate on: first, you get unlimited full-resolution photo backup (versus Apple's paltry 5 GB), Google's killer assistant (squeeze the phone to talk to it), AR features baked right into the camera and a killer feature that can recognize objects like art in the real world and find out more information.

During the event Google's CEO, Sundar Pichai, said that it's hard to differentiate on hardware alone anymore so by building in smart algorithms — machine learning — it's able to help you interact with the real world in better ways, and get out of the way more.

Of course all of this comes at a cost: your privacy. It wasn't until the end of the event, when Google was talking about how the Clip camera doesn't upload your photos automatically, that the word 'privacy' was even uttered but all of these impressive features obviously have implications: your data goes into the cloud for crunching.

For some, that's a bridge too far and Apple's entire business model hinges on not snooping inside your message threads. Apple's approach to machine learning — on device, never synchronized to the cloud — has privacy benefits but has so far proven to be stunted compared with what Google is able to pull off.

If you're able to get comfortable with the idea of Google crunching your photos, you get incredible results (I love Google Photos) but it's a trade-off many people aren't willing to make which I understand is more of a personal decision than anything else.

What was obvious to me this morning is that Google is all-in here. People moaned for years that Google wasn't able to get its ducks in a row and have its services play nice together, and now it's doing it properly. Pixel is the core of that plan, but it's clear with ambient side products like Google Home, Mini and Max you'll likely have a voice-controlled speaker in many rooms soon, and Chromecast will invade your TV to help out there.

Apple's talked for years about products that "just work" but Google showed up today and announced to the world — which overwhelmingly tends to use Gmail, Drive and other core products every day — that it's got an end-to-end experience now that starts and ends with Google. If you're in the ecosystem, Google's products now "just work" arguably just as well as Apple's and you get the type of integrations that doing away with the walled garden affords you.

We've been using the original Google Home at... home for the last year or so, and it's been a great experience: speaking out loud to get access to music, add to shopping lists and just get updates on my calendar has far exceeded our expectations, so I'm curious if we can get comfortable with Home expanding beyond just our kitchen nook.

Google's leverage of machine learning is what's paying off most: Assistant is clearly outpacing competitors by being able to actually learn over time and add a formidable library of commands so that you don't end up in a query dead-end, and building those features into the hardware is impressive.

The Pixel Buds, Google's answer to Apple's Airpods, is perhaps a great example of how they're able to integrate software in a way that makes hardware more compelling: Buds are able to do things like translate languages in near real-time as you're wearing them, which would be great for my awkward interactions in the Netherlands where my rusty Dutch doesn't cut it.

For my part, I wasn't super compelled by the iPhone X this year and felt a bit of a weird gap while iOS stagnated, so I've pre-ordered a Pixel XL. In a year where Apple is juggling a huge change, it felt like the right time for me to try the other side of the fence — and frankly, I'm excited to try something new (especially now that Pixel 2 is guaranteed three years of updates).

If the camera alone lives up to the Pixel hype, I might be off the iPhone for good (though I'll miss my Apple Watch!).

I'll post more about it when it arrives, but for now, it'll be interesting to see if Google publicly shares how well Pixel sells this year as I have a sneaking suspicion the rift between iPhone 8's 'same old' feel and the iPhone X being virtually out of stock for months may mean people look elsewhere.